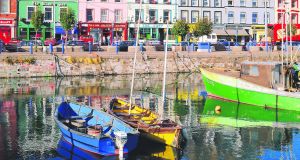 Cobh harbour, Cork: Port of Cork is leading a consortium to buy the 114-acre Irish Fertiliser Industries’ facility at Marino Point, closeby, from the National Asset Management Agency to redevelop as a facility to handle oil and farming products. Photograph: Roy Rainford

An €18 million plan to redevelop a key industrial site in Cork harbour faces a delay after the joint venture backing it withdrew its notification to the State’s mergers watchdog.

Port of Cork is leading a consortium that intends to buy the 114-acre Irish Fertiliser Industries’ (IFI) facility at Marino Point, close to Cobh, from the National Asset Management Agency (Nama) to redevelop as a facility to handle oil and farming products.

The port company and its partners, which include publicly quoted Origin Enterprises, withdrew their notification of the deal to the Competition and Consumer Protection Commission (CCPC) yesterday.

The move is likely to delay plans to redevelop the site, as deals on the scale they propose must get the commission’s approval before going ahead. Any plan for the IFI site will have to be notified to the commission again before proceeding.

Competition commission investigations can take either 30 or 120 working days to complete, depending on whether it makes a decision at the end of the shorter, phase-one inquiry, or opts to subject a deal to a longer, phase-two investigation.

Port of Cork confirmed yesterday that the notification had been withdrawn for the time being but said this was to allow the parties involved to “reflect” on the development’s next steps.

It is understood that queries from the commission itself prompted the parties to withdraw the notification. However, people familiar with the deal said on Monday that the port company and its partners intend to continue with the project.

The decision is not connected with a call from local councillors for more information about the redevelopment plans for the site, which has lain idle since IFI closed 14 years ago.

Port of Cork, Origin and a subsidiary of John O’Regan’s Sirio Retail Holdings joined forces earlier this year to buy the Marino Point site for €8 million from Nama and intend to spend a further €10 million redeveloping it.

Local figures welcomed the news at the time as the building and operation of the new port facility would create employment.

About 220 jobs were lost when IFI closed in 2002. A year earlier, the area lost another major employer, Ispat, which had taken over Irish Steel in 1995.