Cityjet to bring 22 new pilots on board 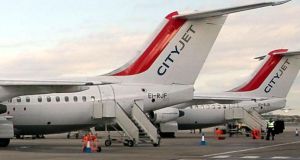 Cityjet has forged a partnership with Dublin-based aviation training company, Simtech, to train in its new pilots.

Irish independent airline, Cityjet, will train in 22 new pilots this year to cope with increased demand on its routes in Europe.

The carrier has forged a partnership with Dublin-based aviation training company, Simtech, to train in its new pilots.

It said on Monday that six pilots it has just hired will begin sessions with Simtech in May.

In total, 22 newly-recruited pilots, who already havce commercial licences, will be trained for Cityjet this year by Simtech at its St Margaret’s, north Co Dublin base.

The pilots will be trained on the RJ85 aircraft used by the airline.

Cityjet executive chairman, Pat Byrne, said: “Since January we have engaged Simtech to undertake flight simulation training as part of the process in producing qualified civilian pilots for our aircraft.

He added that the airline employs 150 pilots but needs additional fliers to deal with its growing route network and flight frequency.

1 PTSB plays down Ulster Bank talk as it sells €1.4bn of loans
2 Irish tech company Asavie acquired by Nasdaq-listed Akamai
3 Am I crazy to consider switching to an Ulster Bank mortgage?
4 Asian shares slip as surging Covid cases weigh on global economy
5 Up or down – how much is your Local Property Tax this year?
6 How much state pension will I get next year?
7 Brexit to curb services trade with UK, accountants group warns
8 Tesco takes to the skies with home delivery by drone
9 Insurers to continue forbearance for customers hit by Covid
10 CRH sells Brazilian cement business for $218m
Real news has value SUBSCRIBE