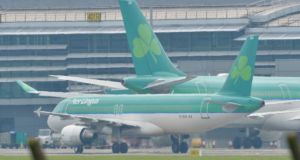 The union Siptu will seek assurances on the future of 1,500 Aer Lingus jobs before deciding whether or not to back the bid. Photograph: Alan Betson/The Irish Times

Ryanair is challenging the UK Competition and Markets Authority’s (CMA) rulling that it cut its holding in Aer Lingus to 5 per cent from 29.8 per cent.

It has also emerged Aer Lingus will have no say in any sale of its rival’s holding, as the CMA has decided this would not be appropriate.

Incoming Aer Lingus chief executive Stephen Kavanagh wants the airline to be allowed to manage the sale of the stake, as he fears that investors with no interest in backing the airline could buy the shares, particularly if the IAG bid does not succeed.

Any formal offer by IAG for Aer Lingus will have to be referred to the CMA before any sale gets the go ahead.

The union’s divisional organiser, Owen Reidy, said that the union wants to meet IAG chief executive Willie Walsh and his opposite number at Aer Lingus, Stephen Kavanagh, to get guarantees that ground staff jobs will not be outsourced if the group takes over the Irish airline.

“There is a lot more that both IAG and Aer Lingus need to do to assuage members’ fears,” Mr Reidy said following a meeting with shop stewards yesterday.

He added that Siptu’s president Jack O’Connor has also begun seeking information from the International Transport Workers’ Federation about other unions’ experience of dealing with IAG’s constituent airlines, British Airways, Iberia and Vueling.

A group of eight Labour Party TDs will meet today to decide how to word a motion to be put to this weekend’s party conference. A number of the group met representatives of unions at the airline yesterday and expressed concerns about any takeover.

They will meet more union representatives before drafting the motion, which will not be binding on the party in Government even if passed.

Siptu fears its members’ jobs are the most vulnerable if IAG succeeds as it represents most of the ground and head office staff. Mr Walsh has conceded some head office jobs could be lost.