Taoiseach was told banks might lose €10.6bn in worst-case scenario 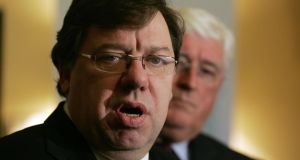 Former taoiseach Brian Cowen: told the Dáil in November 2008 that a PwC report ‘demonstrates, under a number of stress scenarios, that capital levels in the covered institutions will remain above regulatory levels in the period to 2011’. Photograph: Alan Betson/The Irish Times

Former taoiseach Brian Cowen and figures from accountants PricewaterhouseCoopers will face questions at the Oireachtas banking inquiry about a PwC report in November 2008, which said Ireland’s banks were adequately capitalised at the time of the State guarantee two months previously.

Mr Cowen, who is due before the inquiry in the coming months, is understood to have written to the inquiry asking which topics and documents it wishes to discuss with him when he appears.

Outgoing PwC chief Rónán Murphy is among 29 individuals the inquiry will call to hearings beginning in April.

According to the Sunday Business Post, the PwC report showed that 22 borrowers owed €25.5 billion to Ireland’s banks when they were guaranteed and estimated that the banks might lose €10.6 billion in a worst-case scenario.

The banks were ultimately rescued to the tune of €64 billion in taxpayer funds.

Mr Cowen told the Dáil on November 19th, 2008, that the PwC report “confirms that all the institutions reviewed are in excess of regulatory capital requirements” when the guarantee was introduced on September 30th.

“The PwC report demonstrates, under a number of stress scenarios, that capital levels in the covered institutions will remain above regulatory levels in the period to 2011,” he told the Dáil.

The joint board of the Central Bank and the Financial Services Authority of Ireland had submitted the PwC report to the late Brian Lenihan, then minister for finance.

“The Minister has met with the governor of the Central Bank, the Financial Regulator and PricewaterhouseCoopers to discuss the report, which presents an analysis of the capital positions of the six institutions having regard to their loan book,” Mr Cowen said.

1 Ryanair and Aer Lingus monitor impact of conronavirus on travel to Italy
2 Bank leaked my loan request to family who tried to rip me off
3 Mastercard to create 1,200 new jobs by expanding base in Dublin
4 Boris Johnson's new immigration regime will damage much more than industry
5 Varadkar resigns amid warning impasse will hit the economy
6 How can I view my dead brother’s will if I’m not the executor?
7 Google completes purchase of Treasury Building for €120m
8 Garda mobile contract win causes concern over Eir’s use of Huawei kit
9 Why Sweden ditched its negative rate experiment
10 Knock gets visit from world’s largest passenger plane
Real news has value SUBSCRIBE