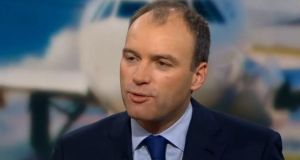 The aircraft finance giant formed last year by the $7 billion takeover of International Lease Finance Corporation (ILFC) by Irish-based Aercap has moved the bulk of its near €40 billion in assets to the Republic, according to its chief executive, Aengus Kelly.

Aercap agreed to buy ILFC from US insurer AIG in late 2013 in a $7 billion cash and shares deal to form the world’s biggest aircraft leasing company, which had a fleet of 1,130 planes and another 391 on order at the end of last September.

The company has moved its commercial base to the Republic, where it has offices in Dublin and Shannon, which means that it has shifted ownership of the bulk of its €39.1 million in assets here.

The group had a target of transferring its assets here by the end of 2015 and achieved this ahead of that deadline. Irish rules on withholding tax meant that the move saved it €200 million.

Its takeover of ILFC went through on May 14th. On the basis of Aercap’s share price in New York on that day, the deal had a total price tag of $7 billion. AIG is a substantial shareholder in the group.

“It took six months,” Mr Kelly says of the transaction. “We had to get approval from anti-trust bodies in 28 countries.”

While it was waiting for the regulators, Aercap got on with bringing the two companies together, such as merging IT systems, human resources departments and transferring its assets.

Establishing its commercial operations in Shannon meant bringing 40 families from LA to set up home in the Co Clare town. Mr Kelly points out that the executives and staff who moved here would not have come if the special 35 per cent tax rate for ex-pats had not been available.

The Government introduced the controversial arrangement in order to aid multinational investment.

Aercap, which is ultimately descended from GPA, the original leasing business set up by the late Dr Tony Ryan, has $7 billion in cash on hand and raised $13 billion in financing during 2014. It has more than 200 airline customers in 90 countries. Its after-tax income is about $1 billion a-year.