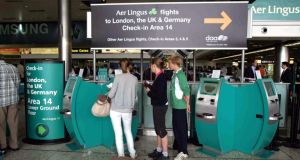 It takes about three minutes to check in luggage at the express bag drop installation at Dublin Airport, according to Aer Lingus chief operating officer Mike Rutter. 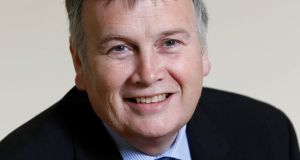 Air passengers who flew with Aer Lingus this summer may have noticed new practices at check-in and boarding. The airline has been cracking down on lateness, changing how it invites passengers to board and encouraging flyers from Dublin Airport to use new self-service stations to weigh and tag their luggage.

Mike Rutter, Aer Lingus’s chief operating officer, said it had shaved seven minutes off average boarding times by “simplifying” how it does it. And having traditionally lagged Ryanair on punctuality, Aer Lingus has landed ahead of the short-haul pack at Dublin for each of the first eight months of 2016 – “a complete reversal” of its earlier record.

Punctuality cuts both ways. Passengers may find Aer Lingus’s tolerance for latecomers is not what it used to be, with the airline no longer risking delays to departures purely to suit those who show up late to the gate.

“Aer Lingus has always had a strong reputation for going that last mile to get the last person on board the aircraft, even if they took a delay for it,” said Mr Rutter, who joined the airline from UK regional operator Flybe in 2014.

“There’s a lot of good equity in the brand as a result of our helpfulness in some strange places where we have rescued our good Irish guests. However, what we let slip was an understanding of one of the main reasons people travel, which is that they basically want to get somewhere on time,” he said.

“We know if we don’t close the gate with at least 15 minutes to go before departure we’re not going to be able to close the aircraft up and get it away.”

Numerous other new policies, while seeming small in isolation, have contributed to the efficiency push. No longer are “guests” asked to board according to seating area. Instead, “priority” boarders are called first, then everybody else.

“Aer Lingus’s view historically was that a complicated boarding process was best for guests. Whereas actually most guests want a simple boarding process,” said Mr Rutter. “People understand the rules, they’re not wondering: ‘Am I in row 23 or 24?’”

The now standard phenomenon of being asked at the gate to hand over a trolley case for placing in the hold is also part of a strategy to make aircraft turnaround times shorter. “We can take about 100 wheelie bags in the lockers, so if we have 120, we know we’re going to have a problem before we start,” Mr Rutter said.

It takes about three minutes to check in luggage on the express bag drop installation at Dublin Airport, compared with 15-20 minutes “historic” queuing times, Mr Rutter said, while the multimillion investment has also allowed the airline to increase check-in capacity without requiring extra terminal space.

The airline, which is in growth mode, hoped to retain a four-star rating awarded by air travel review site Skytrax, as well as live up to the message of recent advertising campaigns, Mr Rutter said.

“Like many large organisations, over the years we had become too complex. We weren’t paying enough attention to making sure that our on-time punctuality was at the level it should be.”

Aer Lingus, now owned by British Airways parent IAG, began calling passengers by the hospitality term “guests” in 2014. Mr Rutter said he wanted staff to view customers as “if they were stepping into the Disney organisation”.