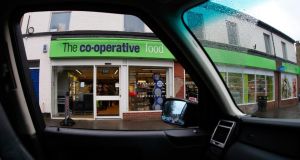 A Co-Operative Food store, operated by the Co-Operative Group , is seen through the passenger window of an automobile in Disley, UK. Photographer: Paul Thomas/Bloomberg

Paul Myners, in his role as senior independent director, had warned in March that the customer-owned group faced extinction unless it became more commercially-driven.

His departure, confirmed by three sources familiar with the situation, follows the sudden exit of chief executive Euan Sutherland last month, who walked away from what he described as an ungovernable organisation.

Full-year results to be published next week are expected to reveal a loss of around £2 billion. The Co-op, owned by its 7.2 million members and which touts its bank, food shops and other services as an ethical alternative to profit-driven rivals, has been hit by one scandal after another in the last year.

The nadir came in November when the former chairman of the Co-op Bank, Paul Flowers, was arrested as part of an investigation into the supply of illegal drugs. The Methodist minister was also revealed to have been given the job despite having no banking experience. His departure in June came shortly after regulators found a £1.5 billion capital hole at the banking arm, forcing the bank into the arms of its creditors and denying the Co-op Group control of the lender.

Mr Myners, formerly a minister in the Treasury with decades of experience within Britain’s biggest companies, had been appointed in December last year to review its operations. He was being paid a token salary of £1 .

Just days after Sutherland’s abrupt departure, he warned that the Co-op was on course for collapse if it did not reform its unwieldy structure. He urged the company to create a smaller board with the skills to hold executives to account.

The board is made up of members from its regional boards and independent Co-operative Societies, and is entirely non-executive, meaning no director is involved in the day-to-day operations.

Mr Myners warned then that he was also “deeply troubled by the disdain and lack of respect” for the executive team he had witnessed from some members of the board. The Co-op group declined to comment.