When everyone is stampeding for the exits, Paul Singer steps in and buys up the debt 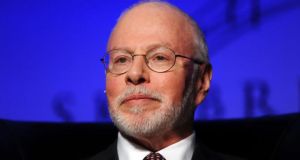 Paul Singer: To his enemies he is one of capitalism’s vultures who swoops down to feed off the weak.

One of the titans of Wall Street, Paul Singer is in many ways the embodiment of modern global capitalism.

From his offices in New York he has just forced Argentina into a second default in less than 13 years in pursuit of the money he says it owes him, becoming in the process a billionaire posterboy for the global 1 per cent who can bring entire nations to their knees.

But to the 69-year-old’s admirers – who swoon over his reputed intellectual prowess and the ability of the hedge fund he set up in 1977 to keep providing above-average returns – he is a necessary corrective element to any marketplace who armed only with the law helps keep debtors honest.

Singer’s investment strategy is relatively straightforward: when everyone is stampeding for the exits he steps in and buys up the debt of struggling governments and companies at steep discounts. Then he waits for the paper to rebound or, in the case of bankruptcy, uses the courts to extract a profit.

Though profitable, Singer’s strategy requires nerve, patience and deep pockets. After more than a decade and millions spent on legal battles he is still waiting for a return on his Argentina play. The deep pockets he has – his Elliot group has over €12 billion under management and Forbes estimates his personal fortune at €1.12 billion.

To his enemies he is one of capitalism’s vultures who swoops down to feed off the weak. Just the rumour that he was circling Greek debt helped shape that country’s debt restructuring.

Singer even sniffed around the emergency wind-down of Irish Bank Resolution Corporation last year. Holding $75 million (€56 million) of subordinated IBRC debt, two of his junior funds filed a “preliminary objection” to efforts by the Government to have US courts protect the bank’s US assets from creditors.

Luckily for Ireland, the funds dropped their challenge when a Delaware bankruptcy court blocked their request for access to official records revealing the Government’s decision-making behind the emergency liquidation of the bank.

A critic of the Fed’s monetary policies, Singer has warned that the US and Europe are on the course to “mass poverty and degradation of freedom”. He is an advocate of entitlement reform in the US and was a key backer of Mitt Romney’s failed presidential campaign, though as an advocate of gay marriage he has little time for the Republican Party’s fundamentalist wing.