Highlights from the controversial three day hi-tech extravaganza. This year's summit is the last to be held in Dublin as the event relocates to Lisbon for 2016 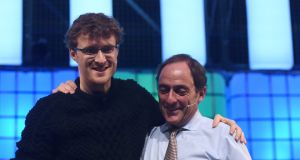 The final day of Web Summit 2015 began with founder Paddy Cosgrave inviting an assortment of entrepreneurs, dignitaries and politicians on stage, but in a sign of how quickly things can change, the delegation were all Portuguese.

Whereas in years past, Taoiseach Enda Kenny wouldn’t have missed a photo opportunity and the chance to talk about Ireland being “the best little country in the world in which to do business”, this year it was Portuguese deputy prime minister Paulo Portas who got to bask in some of the Web Summit spotlight and extol the virtues of Lisbon as a start-up hub and conference venue.

“Lisbon has recently been described as the next Silicon Valley or San Francisco,” said Portas. He promised great infrastructure and conference facilities, the obligatory great nightlife and even sunshine in November, which drew appreciative whoops from the audience, perhaps still damp from the drizzly morning in Dublin.

As Portas and Cosgrave shared a warm embrace and became BFFs, you have to wonder if a certain politician in Merrion St is feeling a little forlorn and jilted.

Don’t bring up your lunch

Later in the morning, Cosgrave also invited on stage Margaret Jeffers of Good Food Ireland and the team running the Food Summit over in Herbert Park for a deserved moment in the spotlight. However, no one mentioned the controversy surrounding the €20 cost of lunch at the Food Summit, which has generated inevitable indignation among attendees and on social media.

Among the speakers on the Centre Stage was former Apple chief executive John Sculley and former Apple and Beats designer Robert Brunner, who discussed the value of good design at all segments of the hardware industry. The pair, whose company Obi Worldphone aims to bring attractive and affordable smartphones to markets in the developing world, insisted that it was possible to differentiate through good design. “Good design doesn’t have to be expensive,” said Brunner.

Also on the main stage was Michael McAvoy of the Onion, who discussed how satire is changing in the modern digital world. “There is more pressure to be quick,” said McAvoy, “but we do produce timely content. The bigger point is are you commenting on something on a unique enough way that, even if you don’t have the first joke, you have the best joke.”

New stages on the third day included the fashion, health technology, money and music “summits”, with long queues to get access to the fashion stage in particular, where model agency founder Simon Chambers and fashion and beauty blogger Estee Lalonde attracted a large crowd eager to hear how the fashion industry is being transformed by social media.

Before lunch, the finalists in the Web Summit’s “Pitch” competition attempted to impress the competition’s judges that their start-ups deserve to beat out the intense competition - the winners will be announced just before final speaker Ed Catmull takes to the Centre Stage at 4pm.

More from the Web Summit

This week we’re talking about . . . the Web Summit

Web Summit: For whom the Nasdaq bell tolls in Lisbon

Web Summit 2016 off to a positive start after initial hiccup