Wearable technology that feels like skin: to keep tabs on health, beauty and style 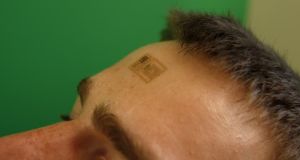 In an undated handout photo, a wearable computer sensor developed by MC10. An emerging class of wearable computers attach directly to the skin and are being tested for medical monitoring purposes, but advocates are also giddy about their possible uses as style accessories.

When it comes to the future of computing, there is one major known and a principal unknown.

Apple and Samsung, for example, are betting on the wrist; Google, the face. A slew of tech companies believe clothing will simply become electronic. Yet there’s a whole new segment of start-ups that believe all of the above are destined for failure and that we humans will become the actual computers, or at least the place where the technology will reside.

Their enthusiasm is on an emerging class of wearable computers that adhere to the skin like temporary tattoos, or attach to the body like an old-fashioned Band-Aid. Many of these technologies don’t look anything like today’s gadgets. Instead, they are stretchable, bendable and incredibly thin. They can also be given unique designs, to stand out like a bold tattoo or to blend in to the colour of your skin.

While these wearables raise novel privacy concerns, their advocates say there are numerous benefits. Attachable computers will be less expensive to make, provide greater accuracy because sensors will be closer to a person’s body (or even inside us) and offer the most utility, as something people won’t forget to wear.

MC10, a company based in Cambridge, Massachusetts, is testing attachable computers that look like small rectangular stickers, about the size of a piece of gum, and can include wireless antennas, temperature and heart-rate sensors and a tiny battery. “Our devices are not like wearables that are used today, where people wear them for a little bit and then throw them into a drawer,” said Scott Pomerantz, chief executive of MC10. “Ours are always on you. We have the smallest, most flexible, stretchable, wearable computer, and you can collect all sorts of biometric data tied to your motion.”

MC10 recently teamed up with John A Rogers, a professor of materials science and engineering at the University of Illinois at Urbana-Champaign, who has been working for nearly a decade to perfect flexible devices that can be worn on the skin or implanted internally.

How would these gadgets work? Imagine being able to slap a few Band-Aid-size sensors to your body when you go for a run, then seeing a micro-level reading of your exercise on your phone.

Maybe you want to figure out which deodorant would be best for you. This would be done with a sticker that tracks your sweat level, then emails you a few brand recommendations. Or if you want to monitor your baby’s breathing, you would stick a little sensor on the baby’s chest that will alert you to any problems.

“Without that kind of intimate physical contact, it’s going to be difficult, or maybe even impossible, to extract meaningful data.”

The health applications are enormous. Over the past year, Rogers and his team of scientists have been working with patients with Parkinson’s disease to monitor their motions; dermatologists to treat skin diseases; and beauty companies such as L’Oréal to develop digital stickers that track skin hydration.

Wearable-computer advocates are also giddy about the infinite style possibilities. “It turns out that the mechanics of these devices are 100 per cent compatible with kids’ standard temporary tattoos,” Rogers said. Meaning, they can be made to look like tattoos, with each segment containing different sensors.

Anke Loh, the chairwoman of the fashion department at the School of the Art Institute of Chicago, has been experimenting with making the attachable computers look like body art.

“You see these patches and you really want to put them on your skin, even without knowing what the function is,” Loh said, noting that most wearable computers today are clunky and ugly. “There’s a lot of potential to combine fashion and technology.”

On a more futuristic front, scientists at the University of Tokyo have been working on an “e-skin”, which, as you may have guessed, is an electronic skin that sits on top of real skin. It looks like a flexible and stretchable sheet of plastic wrap, yet contains lots of health-related sensors.

In another iteration of e-skin, scientists are working to add a layer of LEDs, turning it into a functional screen that sits on the body.

Digital skins offer numerous applications, not only in monitoring a user’s health, but also as a visual user interface. They can be used on life-like prosthetics and even replace smartphones one day. (Imagine your forearm as a touch-screen display.)

But don’t throw aside your smartwatch or say goodbye to Google Glass just yet. It will be a while before our wearable future becomes known.