Wayra Ireland: ‘It’s bringing together high-value people. They are raising the bar for start-ups’ 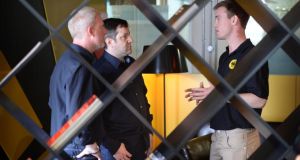 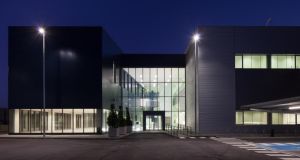 A stage has been set up near the cluster of their open plan offices in the Dockland headquarters of Telefónica’s Irish arm, O2 (which will now be sold to Three, although Wayra Ireland will continue here as apart of Telefonica, according to O2).

One by one, each company makes a pitch to a packed audience of investors representing venture firms as well as corporate-investment arms such as Google Ventures.

Collectively, the group has already done well, closing, or obtaining commitments for, some €3 million in funding. But today caps their nine-month incubation in Wayra, before they pack up their belongings and head into the real world.

Wayra is a young project; it was launched in Telefonica in Latin America in 2011 to support entrepreneurship, particularly among recent college graduates. It quickly spread throughout the company, which now has 13 start-up accelerators: six in Europe and seven in Latin America. Over 250 start-ups have gone through the programme.

This is the first intake of companies in Wayra Ireland, which vary in focus from gaming, betting and publication design to fraud detection, social rewards and wifi network management. Some are run by seasoned entrepreneurs, professionals and technologists, others by newly minted graduates.

Companies who enter the programme – chosen after a tough, extended interview process involving a team of judges primarily from outside Telefónica – share a floor of workspace at O2’s headquarters, get access to a range of expert mentors, are provided with financing of €40,000, and introductions to O2 customers (about 50,000 in Ireland) and its technology suppliers such as Amazon, Google, PayPal, and Microsoft.

Of the 11 companies, all have customers, while nine have pilot programmes with businesses and relationships with Telefónica customers, says Karl Aherne, Wayra Ireland’s director.

Opening those kinds of doors is significant for start-ups. “Companies don’t want to deal with really small companies. But we can smooth the way for them.”

Presentation skills
Aherne works with the companies on product innovation and development, and to introduce them to potential clients and customers. He says that by adding the extra few months to the accelerator – most run for a maximum of six months – “we are really able to drive product innovation”.

This, he says, is what then makes the final investor-day event meaningful for the accelerator companies. “It makes the investor day so much more real. Companies are able to show real traction, show investors how they’re going to fund their business,” he says.

During the accelerator programme, company CEOs meet every two weeks to present a set of goals they will pursue over the next fortnight.

This gives the companies presentation skills but, also, an obligation to face a tough audience, as everybody scores all of the other CEOs at each meeting on their performance against their stated objectives. All start-ups come in with a beta version of a product, says Aherne.

They must then focus on fully developing that product, as well as setting clear business goals.

“We’d work with them in detail on where they will be in five years,” he says. “That’s because investors don’t invest in a product, they invest in the business. We need to make sure we keep the pressure on, that they focus on deliverables, and that they have the best product for the best customers. If you get the right customers, everything else will follow. And they all focus on the global market. If the focus was only on the Irish market, they wouldn’t be here.”

Ireland is the stellar performer in the Wayra network, he says. By population, Ireland should make about 1 per cent of applications, but it actually puts in 8 per cent, Aherne says. “This network, and our start-ups, would be viewed as the best in the Wayra system.”

For Shay Garvey of FrontLine Ventures, one of the investors listening to the pitches, Wayra has already provided two prospective investments.

He believes one of the strengths of the Wayra programme is its long duration. This enables companies to get a very good grounding in a wide range of needed business skills, and gain customers, he says. The community format is also beneficial.

Mentoring
“It’s about bringing together high-value people. The real value-add is the peer-to-peer mentoring that’s going on.”

He notes that Dublin now has several incubators and support systems – LaunchPad, Propellor, and DogPatch alongside Wayra – providing good support to start-up companies.

In addition, he says that an increasing number of medium-sized technology companies, rather than just multinationals, basing themselves in Ireland, are providing a broader technology ecosystem for start-ups.

“They’re really important for us, because there are raising the bar for start-ups.” All of this means Dublin now has a critical mass of technology companies and start-ups, in specific clusters – something missing in past years here, and still missing in places like London, he argues.

Cork-based serial entrepreneur Pat Phelan, who pitched for introductions to client companies rather than funding, says he has really enjoyed having his fraud avoidance company, Trustev, in the accelerator.

The regular “two-week scrum”, in which he must present to colleagues, forces the company to be held accountable to the group, he says. And the wide range of support in mentorship has been invaluable, even for someone with extensive start-up experience.

“I would never have been able to work with a pitching coach, or a demo coach before. That’s really improved our stage presence and our investor pitch. It’s certainly brought our professionalism up to a new standard.”

Game-changer
He credits the mentoring in these areas with helping Trustev to do well in international start-up competitions and to make better funding pitches. Two weeks ago, Trustev fended off thousands of other applicants to take the EU Commission’s Top Start-up award in London.

“All the people in here aren’t going to be a success with their company, but all are going to be entrepreneurs,” he says.

Trustev’s co-founder and CTO Chris Kennedy adds, “They also treat you like a real business here. At other places you can feel more like a college student.”

Cristina Luminea, founder and CEO of mobile educational company ThoughtBox, pitched for €250,000. The company has already been through the start-up incubator LaunchPad – good for her company in its earliest stages, she says. Wayra has provided a needed level of targeted, focused support.

“We were just out of LaunchPad and we wanted to apply to Wayra. We were lucky to be picked,” she says.

“The nine months here were a complete game-changer for us. We’ve launched three products and tested them with customers. We’ve been provided with a lot of support and help all the way.”

The Dublin event was addressed by Liam Casey, CEO of PCH International, who told the audience, “This facility and the people here are as good as any I’ve seen anywhere in the world.”

Speaking afterwards, he said the level of mentoring, and quality of the facility, was excellent. “There are some great start-ups, great entrepreneurs. It’s really encouraging.”

1 Coronavirus: Property rental in the jaws of the epidemic
2 Collison brothers worth an estimated €2.9bn each
3 I want to change my will quickly in case I fall ill. Do I need a lawyer?
4 WhatsApp limits message forwarding to slow spread of misinformation
5 Kerry fintech Taxamo agrees deal with Deloitte
Real news has value SUBSCRIBE