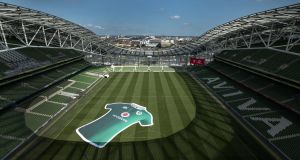 About 20km of cable went into the stadium, along with 259 antennae as part of a multimillion euro investment. Photograph: ©INPHO/Billy Stickland

Vodafone Ireland may have paid a reported €15 million to sponsor the Irish rugby team for the next four years, but the deal has more to it than simply getting the logo on the jersey.

The mobile network has spent an undisclosed sum beefing up the mobile network coverage inside the Aviva stadium, so its customers will still be able to make calls, tweet and share photos on Facebook on match day, even when it is full to capacity.

About 20km of cable went into the stadium, along with 259 antennae as part of a multimillion euro investment for the solution, which Vodafone Ireland chief executive Anne O’Leary said was one of the first of its kind in Europe.

“It was very complex to do it, because of the architecture of the building,” she said. “It’s very impressive.”

The company said it then put someone in every seat in the stadium to check the reception, and – more importantly – tested it to make sure that even if the stadium was filled with almost 40,000 Vodafone customers, the network would still hold up. It covers 3G, 4G and 4G+ connectivity.

“The coverage for a stadium is never simple because you need to cope with a large number of people who are using their phone. They are using data, they are trying to post pictures on Facebook. So to cover a stadium is not a standard solution,” said Vodafone Ireland’s CTO Madalina Suceveanu.

“Everyone, regardless of their position in the stadium, will get improved quality for voice and data.”

Ms Suceveanu it took about a year to get the infrastructure work completed.

The new infrastructure has benefits for people outside the stadium too, boosting coverage in the immediate vicinity. It was an important part of the deal for Vodafone, Ms O’Leary said.

“It didn’t make sense that when people were here [in the Aviva] that they couldn’t connect to the things that mattered most to them,” she said. “Not everyone can get tickets. Everyone wants to share their moments.”

The bad news is that – at the moment, at least – it’s only for Vodafone customers, but Ms O’Leary said other networks could use the infrastructure under commercial agreement with Vodafone.

1 Trump vs Biden: Stakes are high for the Irish economy
2 Bought a desk or a chair? Revenue rules out tax relief for home workers
3 Will remote working become the norm?
4 Tighter regulations for car makers will drive buyers to choose electric
5 Losses balloon at Virgin Media Ireland but revenue rises
Real news has value SUBSCRIBE