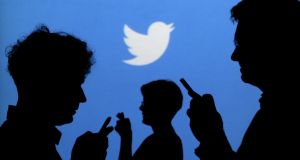 Twitter shares rose to as high as $18.25 in trading before the official market opened in New York

Twitter shares jumped as much as 8.6 per cent in early trading on Monday after a report in The Information said investor Marc Andreessen and private equity firm Silver Lake have “considered some sort of deal.”

The Information said it didn’t know if a deal is “active” now.

Spokespeople for Mr Andreessen and Silver Lake declined to comment to the news site.

Twitter shares rose to as high as $18.25 in trading before the official market opened in New York.

Twitter is in the midst of a major overhaul to help boost growth that has stalled and led to a 35 per cent decline in its share price last year.

1 Basic income for all: Has the Covid crisis given us a new economic model?
2 Only way is up for Stripe as valuation skyrockets
3 ‘I don’t need to do any of this. . .I don’t actually need to work.’
4 Promontoria barred from pursuing doctor over Ulster Bank loan
5 Direct sea routes to Europe offer certainty in choppy Brexit waters
Real news has value SUBSCRIBE