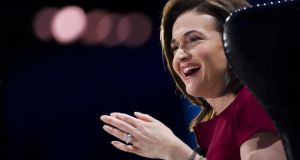 Facebook’s chief operating officer Sheryl Sandberg has become one of the world’s youngest billionaires after the social network’s shares closed at a record. Photographer: Bloomberg

Facebook’s chief operating officer Sheryl Sandberg has become one of the world’s youngest billionaires after the social network’s shares closed at a record high yesterday.

The Lean In author’s fortune surpassed the $1 billion mark with Facebook finshing the day at $58.51 in New York.

The chief operating officer of the world’s most popular social-networking service owns about 12.3 million shares of the company.

She has collected more than $300 million selling shares since the company’s 2012 initial public offering, and owns about 4.7 million stock options that began vesting last May.

The 44-year-old is one of the youngest female billionaires in the world, according to the Bloomberg Billionaires Index.

“She was brought in to figure out how to make money,” David Kirkpatrick, author of The Facebook Effect, a history of the company, said in a telephone interview.

“It’s proving to be one of the greatest stories in business history.”

Ms Sandberg’s rise in wealth mirrors her broadening role on the global stage. The one-time chief of staff for former treasury secretary Lawrence Summers is a donor to President Barack Obama and sits on the board Walt Disney.

She was lured from Google in 2008, and stepped down from the board of Starbucks in 2012.

The billionaire will attend the World Economic Forum’s annual meeting this week in Davos, Switzerland.