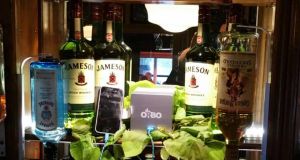 The Orbo in place in Slattery’s pub in Dublin

in 2007 when its Orbo perpetual motion technology failed to deliver the goods and violate the law of conservation of energy. Eight years later Orbo has re-emerged in a Dublin pub in the form of a self-charging battery.

Last week the alleged never-die battery known as the Orbo PowerCube briefly appeared behind the bar in Slattery’s pub on Grand Canal Street, where patrons were treated to what is believed to be one in a series of low key field-tests.

“Soon after I got there a bit of ceremonial music came on and they brought out this silver box. The manager [of Slattery’s] got up on a step ladder and plonked it down on a shelf. It was a four by four-inch box with the Orbo logo on it,” said patron Aidan Sullivan who was present for the field-test.

“The manager produced a mobile phone and connected it to the box, which appeared to be charging it,” he added.

On the pub’s Facebook page, Slattery’s representative describes the Orbo as “a battery and then a perpetual motion motor that continually recharges the battery,” adding that “the motor never dies and does not need external power source.”

In theory, this technology is powered by interacting magnetic fields which feed a battery which then has the ability to charge electronic devices indefinitely without ever needing to be charged itself – a feat that would defy the laws of thermodynamics.

However, Slattery’s appear to be taking it with a pinch of salt, writing on Facebook: “I heard if you plug an Orbo into another Orbo it can mend holes in the o zone [sic] layer.”

Those looking to get their hands on one of these devices will have to exercise perpetual patience. Steorn chief executive Shaun McCarthy told The Irish Times: “We are not offering any Orbo products for sale, we are just doing some basic field trials.”

In addition, Mr McCarthy said the company is not publicising the locations of the field trial units

1 Coronavirus: Construction sector most significant part of new shutdown
2 Wetherspoon’s panto-villain chairman may have the last laugh
3 Remote working doesn’t suit everyone, and it exposes woolly leadership
4 UK needs to be honest about its Covid-19 strategy
5 Rivian takes on Tesla with big batteries and subtler approach
Real news has value SUBSCRIBE