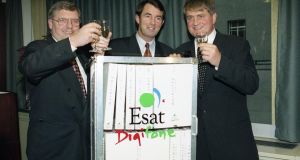 Dramatic disclosures about a possible payment to former communications minister Michael Lowry created a secret crisis in the run-up to Denis O’Brien’s first US IPO, back in 1997.

Despite O’Brien being subjected to an “inquisition” in the Dublin offices of Dermot Desmond’s IIU, financial transfers from O’Brien that ended up in an Isle of Man account belonging to Lowry, were never disclosed. The Moriarty tribunal heard extensive evidence on the matter from all of the main actors in 2001.

O’Brien’s consortium, Esat Digifone, part of the Esat Telecom group, won the 1995 mobile phone licence and was awarded the licence the following year. By the time Esat Telecom was contemplating an IPO in New York, in 1997, Lowry had resigned from cabinet in disgrace, the McCracken tribunal had reported on payments to him from Dunnes Stores, and the Moriarty tribunal had been established. As detailed in that report, in late 1996 O’Brien had a conversation with his then friend, chief executive of Esat Digifone Barry Maloney, about certain success payments that were to be made arising from the bid for the licence. Maloney was anxious proper documentation would be put in place before any such payments were made. O’Brien, anxious for his friend to get on with it, said he too had to make payments linked to the bid.

According to Maloney, O’Brien said: “You think you’ve got problems. I’ve had to make two payments of £100,000 each, one of which was to Michael Lowry.” O’Brien, for his part, said he mentioned having to pay £200,000, but didn’t mention Lowry.

Some months later, according to Maloney, O’Brien mentioned the matter again. The context included the publication of the Moriarty tribunal’s terms of reference, and the drafting of a reference in the IPO documentation to any risk to the Digifone licence that might be associated with the tribunal. Maloney said O’Brien referred to his comments of some months earlier, and said: “Do you remember I told you about the payment to Lowry? Well, I just want to let you know I didn’t do it. Thank God I didn’t do it.” A few weeks later, according to Maloney, O’Brien again mentioned the topic, saying the payment “didn’t go through”. At the time, relations between the old friends were beginning to deteriorate for a number of reasons.

By October 1997, Maloney was of the view that O’Brien should not proceed with the IPO. When he suggested this to O’Brien, the latter said the intended payment to Lowry “got stuck with an intermediary” and hadn’t gone through.

In time the issue was brought to the attention of the directors of Esat Telecom and Esat Digifone. At a meeting in Desmond’s IIU offices (Desmond was a shareholder in Esat) on October 20th, O’Brien, taking part by way of a conference call from the US, said the remarks he had made to Maloney had been a “wind up” and were just a bit of bravado on his part. Desmond said he accepted O’Brien’s assurance that no payment had been made, but would sue O’Brien if it transpired that he was being misled.

It was agreed that O’Brien would write a letter confirming no impropriety, that accountants would check that no improper payment could be spotted in the bank records, and that solicitors would be tasked with ensuring that the Esat companies had the fullest legal protection in the context of the IPO.

However discussions ensued in the period afterwards, with O’Brien at one stage saying the “intermediary” he had referred to was in fact the bank he used, Woodchester Bank. Owen O’Connell, a senior partner with William Fry solicitors, became involved and travelled to the US to talk to O’Brien. He was told that at one stage O’Brien had considered giving financial help to Lowry, whose refrigeration business was in difficulty. O’Brien had a “couple of million pounds in cash” from certain dealings, and earmarked £100,000 for helping Lowry’s business, according to O’Connell’s notes.

Upon his return, O’Connell embarked on an exercise that included examining all withdrawals from O’Brien’s Winchester accounts that were greater than £25,000. As part of this process, he spoke with O’Brien’s accountant, Aidan Phelan.

On November 4th, at 2.15pm, an “inquisition” was held at the IIU offices, with O’Brien, on the phone from the US, being quizzed by Michael Kealey, of McCann Fitzgerald solicitors. O’Brien said Lowry had always been above board with him in relation to his dealings with the landline business, Esat Telecom, that he had known, though it was not yet in the public domain, that Lowry’s business was in difficulty, and that he, O’Brien, was flush with cash. For these reasons he had contemplated giving money to Lowry, but in the end it hadn’t happened.

The IPO went ahead, and was successful. Three years later, Esat was sold to BT and O’Brien’s journey to extraordinary wealth was well under way.

The tribunal, however, in its “money trail” inquiries in 2001, found that in July 1996, six weeks’ after the issue of the licence to Esat Digifone, Phelan, acting on O’Brien’s instructions, had withdrawn £407,000 from an account of an O’Brien company, Radio Investments, in Woodchester Bank.

This money had ended up in an account in Phelan’s name with AIB, the Isle of Man, and had been used to make disbursements on O’Brien’s instructions. These included two payments totalling £150,000 that were made to O’Brien’s friend, the late David Austin, who opened an account to receive the money with Bank of Ireland, Jersey. Soon afterwards the bulk of this money, £147,000, was forwarded to an account with the Irish Nationwide in the Isle of Man, belonging to Lowry. On the day in early 1997 that the McCracken tribunal was established, the money was returned to Austin by Lowry.

Neither O’Brien nor Phelan disclosed these transactions to O’Connell or the boards of Esat Digifone or Esat Telecom. O’Brien told the tribunal the payment to Austin was for a house in Spain he bought from Austin, while Lowry said the payment from Austin was a loan. Phelan said he did not disclose the payments from the Isle of Man account to O’Connell as he did not think they were significant, and because the money was for a house. The tribunal decided the payment was in fact a payment from O’Brien to Lowry, and that Austin, not Woodchester Bank, was the “intermediary” O’Brien had referred to.

O’Brien told the tribunal that if he had disclosed the payment to Austin to the Esat boards, all that would have emerged was a property purchase. However the tribunal noted that at the time, no documentation had been generated to effect the transfer of ownership of the house to O’Brien. The tribunal decided the payment was to Lowry and occurred in circumstances “giving rise to a reasonable inference that the motive for making the payment was connected with the public office then held by [Lowry], namely minister for transport,energy and communiciations”.