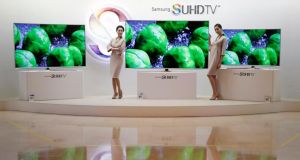 As Samsung Electronics sells fewer of its own smartphones, the South Korean group’s components businesses are under pressure to pick up the slack and secure external customers for chips and display panels, including putting these in rival mobile devices.

And the subsidiary says it is on the lookout for more clients, aiming to have half its total revenue by 2017 from sales to outside customers, up from just over a third in 2013.

Industry officials estimate that external clients account for around a fifth of Samsung Display’s sales of smaller smartphone and tablet panels compared to about 50 per cent for large panels for TVs, underscoring a need for more mobile clients.

“Samsung Display’s desire to grow overseas sales wasn’t as strong when Samsung Electronics’ Galaxy S devices were selling well, but now it’s trying to avoid being too over-reliant on a single client,” an industry source said.

Samsung’s systems chips business is also trying to grow its customer base following a weak 2014. Some analysts say the business lost more than $1 billion last year on declining sales of Galaxy smartphones and the loss of a contract to supply the processor for Apple’s iPhone 6.

Samsung’s next Galaxy S smartphone is widely expected to be powered by its own Exynos processor chips after Qualcomm Inc acknowledged that a key customer will not use its Snapdragon mobile chip in a flagship device.

Samsung has declined to comment on that, but another individual familiar with the matter said the proportion of next-generation Galaxy S phones powered by Exynos chips will likely increase from previous versions. A successful launch of the new device could help win more external orders, and bolster profits.

Samsung said late last month it was in talks with third-party customers about supplying its Exynos mobile processors.

“Some of Samsung’s components businesses and other affiliates were too dependent on the captive (in-house) market,” said IM Investment analyst Lee Min-hee. “There’s been a general shift in direction, with the businesses looking to make external sales and diversify the customer base.”