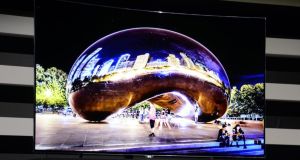 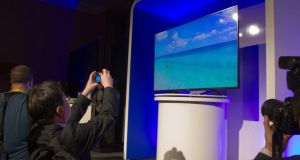 Samsung and LG are preparing to go head to head in 2015 as the battle to win over consumers in the TV market steps up a gear.

Ahead of the opening of the International CES trade show in Las Vegas, both companies showcased plans for the future of TV, involving better screens with the ultra high-definition (UHD) resolution that has been seen on the market in recent years. UHD TVs have about four times the resolution of standard high-definition TV.

First up was LG, with its plans to bring OLED to more consumers than ever before.

“This past year we’ve seen a revolution in the development of TV tech: the advent of OLED TV,” said Tim Alessi, LG Electronics US head of product development. “OLED is now widely recognised as the pinnacle of current TV hardware and the future of television.”

The company is expecting the market for OLED TVs will exceed one million units sold by 2016. It is expanding its OLED lineup in 2015 with seven new TVs making use of curved, flat and flexible displays.

Meanwhile, Samsung unveiled its new SUHD TV, which it said would take the technology to the next level, promising more depth and better colour. Describing the TV as the most cutting-edge in the history of the industry, Samsung co-chief executive JK Shin promised a new level of viewing experience. “It delivers superior picture quality right to your home,” he said.

Although TV manufacturers have been keen to push the new 4K UHD standard, high prices for the new TVs and a lack of readily available content may have dampened consumer enthusiasm. In a bid to solve that problem, Samsung has allied itself with film studios and other TV manufacturers, forming the UHD Alliance. Among the members are the studios 20th Century Fox, Warner Bros and Disney, TV makers Sony and Panasonic, and content distributors Netflix and DirecTV.

The Internet of Things (IoT) is also expected to feature prominently at the CES event. LG president Skott Ahn said IoT was key to its strategy of “innovation for a better life”.

“It’s not just about some devices and apps that control them. IoT is what connects everything together that we value, and it goes beyond our homes,” he said.

LG is planning to extend its WebOS platform to more IoT devices, and announced it was working on a wellness platform that goes beyond simple fitness tracking.

“Instead of just showing you a nice-looking graph, our wellness platform can make your living environment better by actively controlling appliances, like lighting and air conditioners,” Mr Ahn said.

The company is also showcasing technologies it is preparing for smart cars, pledging to work with open standards to connect numerous devices from different brands.

1 Citigroup warns that markets are out of step with reality
2 Chris Johns: Past is another country when it comes to our post-pandemic future
3 ‘I’m so lucky to be in the Caribbean – a million miles from Derry Girls’
4 Tobacco makers still trying to make a mint from Irish menthol market
5 Michael Smurfit: ‘I asked Trump to invite me to the White House for my 80th birthday’
Real news has value SUBSCRIBE