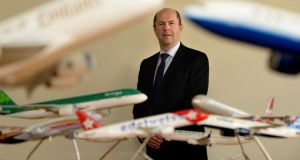 Datalex chief executive Aidan Brogan. The company said on Tuesday that platform revenues rose by 17 per cent in the first four months of 2015, and it reaffirmed full year earnings growth of 20-25 per cent. (Photograph: Cyril Byrne / THE IRISH TIMES)

Travel software specialist Datalex said on Tuesday that platform revenues rose by 17 per cent in the first four months of 2015, as it reaffirmed full year earnings growth of 20-25 per cent.

“Our financial position at today’s date is in line with expectations and we remain on track to deliver strong growth in year-end cash reserves,” Datalex said.

Datalex said it has two major customers - JetBlue Airways and Swiss International Air Lines - due to go live in 2015, and these will begin generating platform revenue in the second half of 2015 which will drive its adjusted EBITDA growth in 2015 and beyond.

Looking to the full year, Datalex said that its performance is still in line with earnings (EBITDA) growth of 20-25 per cent.

“With the new customers scheduled to go live in 2015 and the continued strength of our new business pipeline, we are confident that the foundations are in place for continued growth in the years ahead,” the company said.

In a note, Davy Stockbrokers pointed to “formidable growth” in its platform revenue.

“This confirms the strength of its business wins to date, and is an encouraging sign of what lies ahead, with important go-lives scheduled for later this year (jetBlue and SWISS)”.

Datalex will hold its agm in Dublin on Tuesday , at which it will ask shareholders to approve a dividend of $0.03 per ordinary share which represents a 50 per cent increase on its maiden dividend declared in 2014.

1 In this strangest of recessions, what happens next for Ireland?
2 Michael O’Leary is the boss you want to lead an airline out of crisis
3 Estée Lauder staff at Dublin airport plan further strike action
4 Air travel never going ‘back to way it was’
5 Ireland’s Covid-19 economy in five graphs
Real news has value SUBSCRIBE