Qstream to add 40 jobs to Dublin office this year 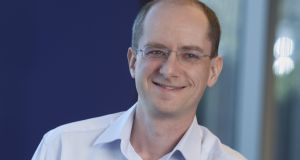 After a panel discussion at the EY Entrepreneur of the Year chief executives retreat in Boston, Qstream chief executive Duncan Lennox said: “At the beginning of the year we were about 20 people in Ranelagh. We’re at 30 now and we’ll add probably another 15 in Dublin by the end of this year.

“A lot of that is engineering. We’ve concentrated our engineering in Dublin. We moved into new offices in December, tripling our space. We have enough room for 50 people quite comfortably right now.”

Qstream provides mobile enterprise software for high-performance sales teams. Mr Lennox, who is from Dublin, was asked by Harvard University to consult on the idea behind Qstream and now leads the business. In January, the company had 65 staff across its operation, which has since grown to 80 and by the end of the year it should be 120. Mr Lennox said numbers would grow into 2017.

“We’ll keep growing. I would expect that next year we’ll add the same number of new hires again. And they will be split 40-45 per cent in Dublin.

“It wasn’t initially the plan that core engineering would be done in Dublin. I knew we’d do sales and services for Europe out of Dublin but then I brought in some amazing engineers that I’d worked with and it just started to make sense.

The company’s investors include Enterprise Ireland, Delta Partners and Frontline Ventures. Every full-time staff member is a shareholder with a four-year vesting period. To date, the firm has raised about $8 million from investors.

1 Fianna Fáil may have just pressed the pause button on the property market
2 Who are Ireland’s 17 billionaires?
3 Saudi prince’s WhatsApp account ‘directly involved’ in Bezos hack
4 European investor acquires Harcourt Road offices for €55m
5 My father in a nursing home wants to gift me his house
Real news has value SUBSCRIBE