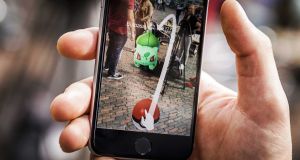 The world of augmented reality may require changes to data protection law so that people can have legal protection when the virtual world encroaches on their physical space and their property, the re:publica conference in Dublin has heard.

The conference, which has sessions exploring technology and society, politics, privacy, media, business, arts and innovation marks the first time organisers have taken the 10-year-old festival to another country.

Dr Guadamuz noted a number of cases and controversies involving Pokémon Go and the virtual tagging of people’s properties. In one widely reported case, a property was tagged online to say that a rapist lived in it.

Dr Guadamuz said that in the case of Pokémon, the game’s developer, Niantic, offered an option for people to flag problems, but there was no indication if this was at all working because there was no data available. He noted, however, that Google granted just 53 per cent of requests made by individuals to delist information about them under the so-called “right to be forgotten” principle.

AI games The kinds of personal data being collected by such augmented reality games were the same kinds as were collected in the course of normal app consumption, he said.

But he was more concerned about something else – that at some point things were going to get “nasty”.

Dr Guadamuz said he believed the issue was not currently covered by other laws. A tag on a property may not be defamatory, he did not believe it was covered by tort, or nuisance, and data protection law only covered individuals.

He proposed the creation of “data objects”, places or objects that were registered in a database, and that individuals, or data subjects, with rights related to those spaces would acquire rights to protection.

He proposed that data protection law would be amended so that it extended to virtual spaces.

Mr Neumann said it did not make sense to say recruitment to Isis was all about the internet, because the internet was “everywhere”.

Outlining his own research on particular cells where people were recruited for Isis, he said that in some cases the individuals were not recruited because they were online, but because they had been friends with other individuals for a very long time. The recruitment was based around “friendship clusters”.

The friendships were documented online, but it was not what happened online that made those individuals travel to become Isis fighters.

Social media firms such as Facebook and Twitter would often remove accounts allegedly associated with Isis within a couple of days, Mr Neumann said.

Most of the Isis fighters were using the Telegram app, which only had about 50 million users at present.

Isis had also been reaching out to people via WhatsApp and controlling them in real time, he said. This included an attack on his own home town of Wurtzburg.

“Everyone is waiting for the time when a terror attack is being livestreamed on one of these apps,” he said.

The Berlin festival has grown from a 700-person meeting of bloggers in its first year to an annual three-day event which drew 8,000 people last May, and included 770 international speakers from 60 countries.