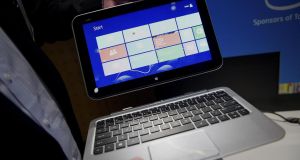 The Department of Finance has linked up with Microsoft and Dell to hold a fully paperless meeting of European Union ministers and governors as part of Ireland’s EU presidency.

The concept of the paperless meeting, which is due to take place on April 12th and 13th, is part of the Government’s attempt to showcase Ireland as a hub of innovation. It also remains in line with environmentally friendly goals, eliminating the need for large voumes of printed packs to be produced for the two day meeting.

The initiative will see the visiting EU ministers and central bank governors kitted out with Dell Latitude 10 tablets, preloaded with the necessary documents for the meeting, such as meeting agendas and papers for discussion, and high levels of encryption to ensure the information remains secure. It will

Further documentation and conference notes will be distributed through Microsoft’s online file storage Sky Drive system and its cloud based office 365 software.

“In keeping with Ireland’s position as an Innovation Island it is appropriate that the opportunity for my fellow ministers and governors to experience the first paperless EcoFin meeting should take place during Ireland’s Presidency of the EU,” Minister for Finance Michael Noonan said.

“Many of the world’s leading technology organisations, such as Dell and Microsoft, are based in Ireland and they are key drivers of jobs, growth and innovation in Ireland. By tapping into their knowledge and willingness to support our public sector transformation agenda we have the opportunity to pioneer new technology.”

Dell Ireland’s general manager Liam Halpin said the company was proud to be part of the “historic” event.

The move to have the first paperless informal Ecofin meeting follows the development of an app to share information on the EU presidency.

1 Ryanair expects air fares to fall when flights take off again
2 ‘I’m so lucky to be in the Caribbean – a million miles from Derry Girls’
3 ‘Never mind GDP; the most fundamental job of any leader is to keep his people alive’
4 Michael Smurfit: ‘I asked Trump to invite me to the White House for my 80th birthday’
5 Brexit, coronavirus and bark beetle pose challenges for Coillte
Real news has value SUBSCRIBE