Musk to build satellites in Seattle in drive for Mars 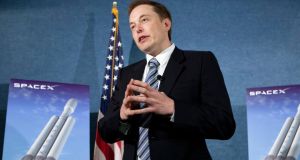 Elon Musk, chief executive officer of Tesla Motors Inc. and Space Exploration Technologies Inc. known as SpaceX, is “going to try and do for satellites what we’ve done for rockets”. ( Photograph: Brendan Hoffman/Bloomberg)

The world according to Elon Musk is about to get more ambitious -- ranging from a Seattle engineering office to develop and launch satellites to the on-time delivery of a crossover electric SUV that will appeal to women.

The 43-year-old billionaire also said in an interview he’s optimistic his Space Exploration Technologies Corp., the first commercial rocket maker to deliver cargo to the International Space Station, will settle a lawsuit with the US Air Force over satellite launch contracts, and that construction of a Tesla “gigafactory” for electric-car batteries outside Reno, Nevada, is on schedule.

Satellites will play a crucial role in Musk’s efforts to reach his ultimate goal -- establishing a human settlement on Mars. Building a commercial satellite business will provide the entrepreneur with revenue and communications know-how that will eventually serve his Martian aspirations.

Musk’s other big endeavor, Tesla Motors Inc., has changes in store as well. The Model X, designed to blend the best of a sport-utility vehicle with the benefits of a minivan, should debut in the third quarter as planned after earlier delays. The vehicle will have advanced autonomous-driving features, and is drawing more than half its orders from women, a big change from the Model S, which gets two-thirds of its sales from men, he said.

“The X will have a step beyond what we’re currently shipping on the autonomous front,” Musk said. “There are a whole bunch of things about the X that have not been revealed.”

The South African born entrepreneur, who will speak Tuesday evening at the Detroit Auto Show, said he’s confident Palo Alto, California-based Tesla will see demand for 100,000 cars a year, giving the company $10 billion in annual sales. In November, the company cut its full-year 2014 sales forecast to 33,000 cars from 35,000, saying it couldn’t produce the higher number. One concern is falling gasoline prices, which will complicate efforts to sell the more affordable Model 3 planned for 2017. That car may sell for as little as $35,000, roughly half the cheapest Model S, and affect the calculus for cost- conscious buyers, he said. “It just means we have to work harder at improving the cost of electric vehicles,” Musk said.

Sales have declined in recent months in China, where consumers have misplaced concerns about home recharging, while Tesla has seen demand increase in the US and Europe, he said.

“China is a small percentage of our sales right now,” Musk said, describing the market as “a wild card that seems to change for reasons we don’t understand.” Rocket Landing On January 10th, closely held SpaceX narrowly missed the first- ever bid to recapture a spent rocket, a key step toward reusing launch vehicles.

Musk said today he’s more confident the next lift-off, set for January 29th, will hit the mark, with a soft vertical touchdown atop an unmanned recovery vessel about the size of a soccer pitch or a US football field.

“If we had not run short of hydraulic fluid we would have actually landed,” Musk said. “So for the next flight we’ve got 50 per cent more hydraulic fluid margins. We’ve got a real decent chance in about three weeks.”