Microsoft beats expectations thanks to strong sales of phones and tablets 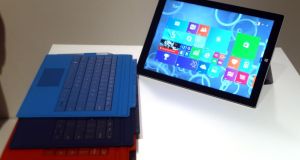 Microsoft reported higher-than-expected quarterly revenue, helped by stronger sales of its phones, Surface tablets and cloud-computing products for companies, while keeping its profit margins largely intact. The results allayed fears of investors in recent days that the industry shift toward lower-margin cloud services was proving hard for established technology leaders to master.

Microsoft shares, which have climbed 33 per cent over the past year, rose another 3 per cent in after-hours trading to $46.36. “In light of recent negative earnings results from tech bellwethers Oracle, IBM, SAP, VMware, and EMC, Microsoft is bucking the trend and we would label these September results as a solid accomplishment,” said Daniel Ives, an analyst at FBR Capital Markets.

Investors were keenly watching Microsoft after harsh warnings from International Business Machines Corp and SAP about operating profits as they make tentative inroads into the cloud, which generally yields thinner margins than technology companies are used to.

Microsoft did not disclose its cloud-based revenue for the fiscal first quarter, but said commercial cloud sales rose 128 per cent, while sales of services based on its Azure cloud platform rose 121 per cent. Perhaps more importantly, it said gross profit margin in the unit that includes Azure rose 194 per cent, despite rising infrastructure costs, which includes the huge expense of building and operating datacenters. In the last four years, Microsoft’s gross profit margin has drifted down to about 65 per cent from above 80 per cent, largely due to its move into the less profitable business of making tablets and phones, but accelerated by the move to the cloud.

Nomura analyst Rick Sherlund figures Microsoft is on track to hit $6 billion a year in cloud revenue soon, which would make it the industry’s largest cloud vendor by his calculations.

That represents only about 6 per cent of overall expected revenue this fiscal year, but investors are highly sensitive to a business they see as key to the future. “We’re the only company with cloud revenue at our scale that is growing at triple digit rates,” said Satya Nadella, on a conference call with analysts. Nadella was keen to stress that Microsoft is more focused on selling higher-margin services via the cloud to its commercial customers rather than just storage and computing power. “Our premium services on Azure create new monetisation opportunities in media, data, machine learning, fast analytics, and enterprise mobility,” he said.