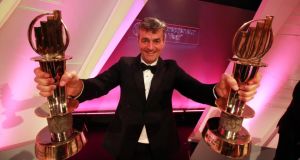 Mark Roden, founder and chief executive of mobile payments firm Ding, was last night named the EY Entrepreneur of the Year 2014 at a gala awards ceremony in Dublin.

More than 1,400 people attended the event at Citywest hotel, with 24 businesses shortlisted for awards.

Headquartered in Dublin, Ding enables migrant workers to support family back home by facilitating the instant transfer of credit top-up to any mobile phone anywhere in the world.

The company has grown 3,600 per cent in the past five years and currently transfers almost $1 million daily directly to mobile phones across all emerging markets.

With revenues of €200 million-plus and offices in Miami, Dubai, San Salvador, Bucharest and Dhaka, Ding currently employs 200 people and has users in over 130 countries.

In 1991, Denis O’Brien asked Mr Roden to join him in establishing a competitor to Telecom Éireann, Esat Telecom. He worked in several roles in Esat and ultimately led commercial operations until 1997.

In 1998, Mr Roden established a calling card company, Torc Telecom. Following rapid expansion, Torc acquired the much larger World Telecom, which ultimately led to the receivership of both companies in April 2001.

Power of the mobile

“In just eight years, Mark has succeeded in creating a global company here in Dublin that is ideally placed to become one of Ireland’s leading technology multinationals.”

The youngest of 11 children, a “completely overwhelmed” Mr Roden thanked all his brothers and sisters for their support.

After receiving his award, he welcomed the “fantastic stamp of approval” and said the company was so far “only scratching the surface”.

Giving advice to aspiring entrepreneurs, he said there will be ups and downs, followed by more ups and downs but you have to keep going.

Mr Roden will go on to represent Ireland at the World Entrepreneur of the Year awards in Monte Carlo next June, where he will compete with more than 60 leading entrepreneurs from across the globe.

Former attorney general Peter Sutherland, chairman of Goldman Sachs International, received this year’s Special Award for making “a profound contribution to the island of Ireland through his entrepreneurial vision, innovation and commitment to excellence”.

Accepting the award, Mr Sutherland said that from abroad Ireland often seems to be more involved in denigration than celebration, adding that we as a country have reason to celebrate.