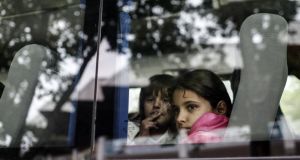 The Irish Red Cross has appealed to various organisations to help it gather details of thousands of pledges of public support for refugees arriving here.

The Government has asked the IRC to collate the public offers of accommodation, goods and services made so far to Government departments, State agencies and various organisations.

The IRC announced on Wednesday it is developing a database to profile the existing, and any new, offers with a view to matching them to the needs of arriving migrants who will be processed through Government-run Reception and Orientation Centres.

The organisation is circulating to NGOs and the voluntary and community sector details about the database, expected to go live next week.

Because data protection laws prevent information about the public offers being passed directly by the various organisations to the IRC, it is proposing the public re-register their offers at redcross.ie using an online form which will store the information securely on the new database.

It has also provided a suggested text for an email to persons who have made offers of support to the relevant organisation. That text notes that details of individual offers will only be passed on to the IRC with the consent of the relevant person.

John Roche, head of national and international services, said it hoped to put the database live early next week and was inviting observations from the various agencies by tomorrow.

The agencies should note the need for the form to be as simple as possible for the public to use, he added.

The Government-appointed Refugee Protection Programme Taskforce will ultimately determine the policy on how the public offers of support are integrated with services and supports provided by the State and the community, voluntary and NGO sector, he noted.

The task force is co-ordinating all arrangements for relocation of the 4,000 refugees Ireland has agreed to take over the next two years as part of its response to the migration crisis.

1 Admission of mistake in Oxford vaccine dose raises doubts over reliability
2 Cliff Taylor: Deal or no deal we are now heading for a hard Brexit
3 Karlin Lillington: How I managed to cut my mobile phone bill by at least half
4 Last orders for Rí-Rá and Globe as Central Hotel gets green light to expand
5 Move to EU or face disruption, City of London is warned
Real news has value SUBSCRIBE