More than 150 entrepreneurs have based their companies at DCU Invent 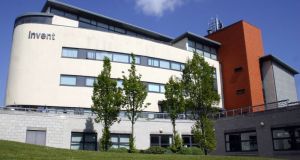 The purpose-built centre, which has 2,800sq m of incubation space for technology start-up firms, is located on the main DCU campus.

Invent works with companies and researchers to promote innovation, knowledge transfer and commercialisation through licensing and start-up companies. Among the multinationals it has worked with over the years are Bristol-Myers-Squibb, IBM, Microsoft, Symantec and Pfizer.

More than 150 entrepreneurs have based their companies at Invent DCU with current residents including Cruatech, KanTanMT, Sigmoid Pharma, SurgaColl Technologies and Pilot Photonics.

Richard Stokes, chief executive at Invent and DCU’s director of innovation, said there were 21 firms located at the centre at present with a further 35 on the Alpha campus.

“The Invent centre is 100 per cent occupied with companies who are a mix of spin-out companies and spin-in firms. The attraction and appeal of locating on and in close proximity to the university is access to our industry-relevant research and the deep expertise of our interdisciplinary scientists and engineers,” Mr Stokes said.

Invent employed seven people last year with staff costs, including wages and salaries totalling €445,964, up from €344,286 a year earlier.

The accounts showed the centre owed over €5.7 million to a number of related organisations at the end of last year, including €3.37 million to Dublin City University and a further €1.8 million to DCU Commercial Limited.