From small beginnings in 2012, Handybook has grown into a highly successful company with 10,000 bookings a week 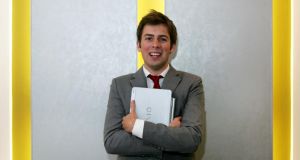 Oisin Hanrahan: “We looked at businesses like Uber and thought it was an incredibly interesting model, and how could you apply it to home services?” Photograph: Eric Luke

Smartphones have become such an integral part of our lives that we no longer think twice about using them in everyday situations.

Grabbing a taxi has become easier with Hailo and Uber is now second nature, while people use their mobile phones to carry out banking transactions, and holiday accommodation can be booked via a smartphone app.

Since 2012, home services – from handymen to cleaning – can be booked quickly and easily by consumers in the US thanks to Handybook.

It’s the work of Dubliner Oisin Hanrahan and his cofounders Umang Dua, Weina Scott and Ignacio Leonhardt, and it’s turned into a lucrative business, attracting millions of euro in investment.

Handybook isn’t the first venture that Hanrahan has been involved in. In his student days, he set up a property development company in Budapest, Clearwater Group, where the seeds of the idea for Handybook were sewn.

But it wasn’t until he moved to Boston to attend Harvard Business School – and shared accommodation – that Handybook became a reality. At that point, services such as Uber and Hailo were gaining prominence, which provided the perfect way for Handybook to reach customers.

“The further we got into it, the more we realised what a massive market home services is. We became very focused on building a great consumer experience, and that’s what Handybook is all about.”

Hanrahan and his partner began working on the idea in May 2012. “We did our first bookings within a couple of months – it wasn’t a perfect technology platform straight away, but that was a very small volume,” he says. “Today, it’s doing over 10,000 bookings in an average week. It’s grown aggressively.”

Handybook doesn’t reveal the number of contractors it has on its books, but it now employs 150 people directly. Suppliers are carefully vetted by the company first through an online application, phone interview, background checks, and finally face-to-face interviews.

Only about 3 per cent of those who apply to be added to Handybook’s roster of services actually make it through.

Hanrahan describes the process as “rigorous”. “We use ratings and reviews to continue to keep that standard and that quality incredibly high.”

Any problems with the service can be dealt with by Handybook itself. It offers a 100 per cent money back guarantee, and a hefty insurance to cover anything that could go wrong. The company takes a commission from each job it books through the service.

Early hiccups were ironed out, including a glitch with the system that could have left customers dissatisfied with the service.

“There are things that go wrong in any business,” says Hanrahan. “There was one particular day I remember very early on when our system accepted more bookings than it should have.

“Everybody except one person in the office had to go out and clean homes that day because we’d accepted more bookings than we were supposed to.

“At that point we realised we needed to spend a little bit more time focused on the technology in terms of limiting the number of bookings.

“As opposed to disappointing customers, cancelling or rescheduling, we all just went out and cleaned that day.”

For now, Handybook is concentrating on North America, with 27 cities already offering the platform. However, there are plans to expand further.

“Any business in this space is all about delivering the best service to the largest number of people as quickly as possible. For us that means starting with the larger cities, but there’s no city we’ve entered that we haven’t had significant growth in,” Hanrahan says.

“We’ll continue to focus on delivering the best consumer service in the cities that we’re in – it doesn’t mean we won’t look at other cities.”

That could include moving into the European market in the near future. Hanrahan says it is not a matter of if the company will expand further but more a matter of timing.

Also on the agenda is the further expansion of Handybook’s services, which Hanrahan says is just getting started, similar to how Amazon started out as a bookseller before moving on to other media and products.

“We’re so early in the evolution of Handybook that we’ve only scratched the surface here. We have a view that we’re going to provide every service inside the home, so whether that’s home cleaning, handyman, electricians, carpenters, plumbers, painters, tilers, lawn care, we have a view that all of those services are going to be delivered by a platform like Handybook,” he says.

It’s not just customers that Handybook has been winning over; the company has also attracted the interest of investors. It has raised €36 million in funding since it started out, with the most recent announcement of €22 million made last month. The company has been backed by former AOL chairman Steve Case’s Revolution growth Fund, General Catalyst Partners, Highland Capital partners and BoxGroup.

“I don’t think there are many companies that are growing anywhere near as fast as Handybook has grown,” says Hanrahan.

“Handybook last week was about seven times the size it was the first week of January, so the pace of growth is incredibly exciting and attractive to venture capitalists and investors. Any business growing at that pace is interesting.

“Think about air travel, car transport, food. They’ve moved to transacting online; you look at home services and it’s still stuck in ratings and reviews. So that’s what makes the category interesting.”

In North America, Handybook has its competitors, including Homejoy. Handybook has been building up its business both organically and through acquisitions.

In January, the company bought Exec, a west coast-based business that has added to the firm’s capabilities in that region.

“This is all about the customer experience, whatever the best way is to deliver liquidity to a market place,” he says. “Whoever gets to a place where there’s liquidity in a marketplace first has the competitive advantage.”

Hanrahan has some advice for budding entrepreneurs, including recognising macro trends and focusing on areas/product that could benefit from those.

“A lot of people have great ideas but the timing ends up being a little off and what helps Handybook so much is the shift towards transactions for services on the web and mobile,” he says.

“You’re seeing a shift where people are willing to make transactions on web or mobile. Five years ago that didn’t exist.People weren’t buying services in small transactions like they do today.”

He also recommends recruiting smarter. “Think about the thing that you’re not great at and recruit the smartest people you possibly can to help,” he says. “Whatever your weak spots are, don’t deny them or ignore them.”

1 How to gift your child a house deposit . . . tax free
2 BOI customers to be charged twice with bank fees on New Year’s Eve
3 Son putting elderly dad under pressure to sign over land
4 Workers have little idea of the cost of retirement income
5 UK executives rush to sell shares over capital gains tax fears
Real news has value SUBSCRIBE