Google removes ‘gorilla’ tag from app, after it misidentified images of black people 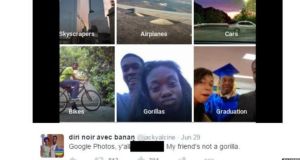 A New York-based software developer tweeted Google about the fact its app had mistakenly labelled a black couple as being “gorillas”. Image via Twitter.

The affected user, a New York-based software developer Jacky Alciné, took to Twitter to post proof of the Google Photos error, along with the question: “What kind of sample image data you collected that would result in this son?”

Google has been heavily criticised on social media because of the label’s racist connotations.

Google Photos app was launched in May and it uses image labelling technology to give tags to objects in photos and then arrange them into albums.

And it's only photos I have with her it's doing this with (results truncated b/c personal): pic.twitter.com/h7MTXd3wgo

@jackyalcine Thank you for telling us so quickly! Sheesh. High on my list of bugs you *never* want to see happen. ::shudder::

The system uses machine learning and as more image data is fed added, the technology should get better at recognising objects in the images. Users of the app can remove incorrect image label results. This helps train Google’s systems so they can improve.

He added it was “also working on longer-term fixes around both linguistics - words to be careful about in photos of people - and image recognition itself - eg better recognition of dark-skinned faces”.

There have been previous issues with the software and in May it was reported that the app was tagging pictures of dogs as horses.

However, Google has acknowledged the sensitivity and gravity of the latest issue.

A spokeswoman said the company was “appalled and genuinely sorry” and was taking action to prevent this type of result from appearing.

“There is still clearly a lot of work to do with automatic image labelling, and we’re looking at how we can prevent these types of mistakes from happening in the future.”

To remove a tag, click on the photo and delete the label, the system will then be trained not to include this in a search over time.

1 Sean Quinn stunned at rebranding of Quinn Industrial Holdings
2 Probate is changing: What does that mean for you?
3 Three Ireland switches on 5G network around the country
4 Irish golf tourism faces ‘wipeout’ unless Covid travel restrictions eased
5 D’Arcy appointment will not blow over
Real news has value SUBSCRIBE