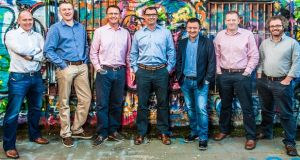 Businessman Colm Lyon and his wife Niamh look set to pocket up to €90 million from the sale of their online payments business, Realex.

The firm, which employs 170 staff at offices in Dublin, London and Paris, has been acquired by US giant Global Payments in a deal worth €115 million.

Set up in 2000, Realex provides the technology which allows online companies accept payments from customers, known in the trade as merchant processing.

The company processes about €28 billion worth of transactions a year on behalf of its 12,500 clients, which include Virgin Atlantic, Aer Lingus and Paddy Power.

It had been partnering Atlanta-based Global Payments for the past three years, largely in the UK market, where 60 per cent of its turnover is generated.

The success of the partnership had positioned Realex as one of the fastest-growing online payments businesses in Europe.

Mr Lyon and his wife Niamh, who between them hold a near 80 per cent stake in the company, which has no long-term debt, will enjoy the lion’s share of the €115 million buyout.

As part of the deal, Mr Lyon will step aside as chief executive to take up the post of non-executive director. He will be replaced by the company’s current chief operating officer, Gary Conway.

Mr Lyon told The Irish Times the acquisition would allow the company to “offer customers a much wider suite of products” than it had before.

He also said he expected the deal to lead to an expansion of the group’s Dublin operation as it supplies technology solutions for the US parent’s expanding network of global clients.

“For Realex Payments’ existing 12,500 merchants, this deal means they can avail of Global Payments’ unmatched international presence, entering new markets and driving their global ecommerce business like never before.”

“And for Realex Payments’ staff, the diversity of opportunity that comes with the deal is enormous. Global Payments conducts business in 28 countries with 4,200 employees across the globe.”