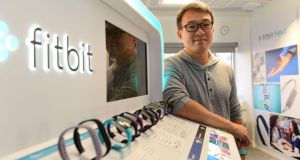 It’s hard not to feel instantly unfit when you walk into the Fitbit offices in Dublin. Housed in the former Esat Digifone building on Baggot Street, the newly opened offices are bright and airy, and have a definite “fitness” theme.

Everyone is wearing Fitbit trackers, for a start. On Wednesday, as its office is officially opened, some were even wearing two. You get the impression that Google 15 – the extra weight Google employees are said to gain during their first year on the job – won’t be a problem at Fitbit, even if the food is as freely available as it is at the search giant.

And forget about standing desks: Fitbit has a meeting room with treadmill desks instead, allowing employees to inch closer to their 10,000 steps a day while they work.

It all sounds a bit exhausting, but Fitbit hopes this will be the start of a productive relationship with Ireland. The company plans to employ up to 50 people in Dublin before the end of the year. It hopes to add 100 more next year, and it has the room to do it.

Chief executive and co-founder James Park was on hand to oversee the official opening of the wearable technology group’s European, Middle East and Africa (EMEA) headquarters. Seemingly unflappable, he even sidestepped a potentially embarrassing exaggeration on his qualifications by Minister for Jobs Mary Mitchell O’Connor, who referred to Park as a Harvard graduate. Park later corrected the record, noting he was technically a dropout.

That puts the Fitbit co-founder among illustrious company alongside Mark Zuckerberg, Bill Gates and Steve Jobs, but he was quick to dispel the myth that it spells success. “There’s a lot of successful high school graduates out there,” he said. “People should stay in school.”

Park may have yet to finish his computer science degree, but he has developed an impressive CV in building companies. Fitbit is not his first shot at the tech industry. First there was Epesi Technologies, a B2B infrastructure software company. It raised a couple of million dollars, but things didn’t work out; it ended with the company laying off its staff.

“I attribute a lot of that to my inexperience at the time,” he said. “But I did learn a lot of really hard lessons from that start-up.”

It did not put him off. Park and some of the engineers from Epesi immediately formed Windup Labs, a firm developing peer-to-peer photo-editing and sharing software. Four years later, Cnet swooped in and bought it, prompting Park to move from Boston to San Francisco. He stayed at Cnet for another couple of years, taking up a role as director of product development.

But he didn’t stay still for too long. Fast forward to 2007: Park and his co-founder Eric Friedman came up with the idea for Fitbit, aiming its products at ordinary people rather than committed runners and fitness enthusiasts, although they are not forgotten either.

The idea for the product was sparked by the Wii, Nintendo’s games console that brought motion gaming centre stage. As a games fan, the Wii piqued Park’s interest, so much so that he found himself queuing outside Best Buy in San Francisco to get one of the consoles – not for the faint-hearted.

“I was really amazed by the way Nintendo had made gaming fun and active,” Park said. “My co-founder Eric and I thought: ‘How do we capture that magic and put it into more portable form?’ That was the start of Fitbit.”

The movement has caught on, and Fitbit has to date shipped almost 50 million products. Following on from the initial Fibit Tracker, which was unveiled at TechCrunch50 in 2008, the company has expanded its range to include the Zip, the One, the Ultra, the Charge, the Surge, the Flex, the Force and the Alta. It’s a mind-boggling list, but it has struck a chord with consumers who are looking for something that fits their lifestyle.

“Before we started, really what was out there was either high-end running watches or big, clunky pedometers. What we realised was that there is a lot of benefit to applying digital technology to health and fitness, and there really wasn’t any product on the market that allowed everyday people , not just serious athletes, to use technology to get healthy and more fit,” Park said. “The original inspiration for the company coming from the Wii was to try to make the whole experience very simple, intuitive and, more importantly, fun as well.”

The Fitbit also taps into a competitive streak, with Park acknowledging that it can become addictive – from counting up your 10,000 steps to earning badges and competing with friends and family. The company has created a user community that essentially does part of its marketing jobs for it.

It’s safe to say that Fitbit is a high point on Park’s CV to date. It’s a record that got the entrepreneur on to Fortune’s 40 under 40 in 2015 – he’s 39 – and delivered a successful stock flotation for Fitbit.

The company went public in 2015, valued at $4,1 billion. Initially priced at $20, the shares surged in the early days after the initial public offering (IPO). At the last count though, Fitbit stock was worth more than $15 a share.

It wasn’t an easy run. “We were just focused on survival for a pretty long time. In fact, you might say that I’m always kind of in survival mode, always being paranoid,” he said. “When we announced the product [at TechCrunch50], I think we would have been happy if 50 people bought our product. But at the end of the first day we had a couple of thousand preorders. We knew we were on our way.”

These days it’s easier to get the money to build such a product. Kickstarter, Indiegogo and other crowdfunding platforms have lowered the barriers for entry, allowing would-be entrepreneurs to build products without having to have a massive capital store of their own. Fitbit has moved past that stage, but Park acknowledges that it would have smoothed the path for its products considerably.

Fitbit was profitable before it had its IPO, and it continues to top the markets for its wearables.

However, the company can’t afford to rest on its laurels. Not only does it have to deal with close rivals in the industry, such as Jawbone, which would be only too glad to rip the mantle from its shoulders, but it also has newcomers such as Apple and other smartwatch makers trying to encroach on its territory.

Earlier this week, it unveiled its latest products, the Charge 2 and the Flex 2. Both are follow-ups to popular devices that Fitbit has already sold to millions of customers, but each improves on its predecessor. The biggest change is for the Flex 2, which is now waterproof.

Despite having a full agenda these days, Park is still heavily involved in product development. The head of the company’s industrial design division reports directly to him and he tests each product personally before it becomes part of the Fitbit family.

The Dublin office is the company’s EMEA headquarters. The region is becoming increasingly important, Park says, because while Fitbit has sold millions of its device in the US, Europe and the surrounding countries still have room for growth.

Recent events may have led a few companies to think twice about establishing here, with the European Commission’s Apple tax ruling causing a bit of a shock wave. It hasn’t fazed Park, though.

“We need a European headquarters, we’re already established in Ireland. I don’t think the recent ruling changes our plans for Dublin and Ireland at all,” he said.

The company has had its share of legal battles. It recently won a bout with Jawbone, which had accused Fitbit of stealing company secrets. Before the case came to hearing, the patents on which Jawbone was relying were struck down. The judge for the US International Trade Commission ruled in favour of Fitbit.

“That reaffirmed our belief that Jawbone was using the legal system in the US to basically harass us in lieu of competing fairly in the marketplace,” said Park.

“I prefer to settle in the marketplace, but we’re pretty confident in our position.”

Opponents say it’s about 20 beats per minute off, on average, when a user is engaging in moderate or high-intensity exercise, and they’re hoping the court will agree with their findings. Park stands over his company’s product, pointing to independent studies that have found the Fitbit to be more than reasonably accurate – to within a 10 per cent.

“They’re not marketed as medical devices, or scientific devices. They’re meant for people as a general indicator to get healthier and more active, and I think we’ve been pretty successful,” he said. “That said, we do a lot of rigorous testing against EKG [electrocardiogram] chest straps. We stand by the validity and accuracy of our products.”

Despite the millions of devices shipped by Fitbit and competitors, wearable technology is still in its relative infancy. Park thinks Fitbit will become more involved in the overall health of its users, helping to fight diseases such as diabetes and heart conditions. He can see a future where you could even be prescribed a Fitbit by your doctor.

Fitbit is already involved in a medical study at the US-based Dana-Farber Cancer Institute that is examining at a possible connection between physical activity and breast cancer recurrence rates.

Any sharing of data comes with privacy concerns, and some people may not be so keen to share their information with the doctor or insurance company. Park said the company is protective of its customers’ privacy, requiring explicit permission at every step before it will share anything with third parties.

For all the corporate minituae involved in running a listed business, Park retain a vision. “My vision is [that], just as today people think of in automobiles – things like airbags and seatbelt are standard and you’d be crazy to buy a car without them; you can’t even get one – there shouldn’t be any reason why Fitbits shouldn’t be considered the same way. It has the potential to help people get healthier and prevent disease so, if you could be healthier by wearing the device and getting motivated, why would you not?

Something that might surprise you: He’s a video games fan, not that he has much time to play, these days. His preferred format is PC rather than console. He really wants to try No Man’s Sky.

Something that won’t surprise you: He doesn’t have much time to spend on keeping fit, so he likes to go for short, intense runs. But he has also tried indoor climbing and goes to Tahoe for skiing and snowboarding.