Unveiled at the CES show in Las Vegas, Faraday Future look to take on Tesla with their FFZero1 concept car. The 1000 horsepower car has four motors, one at each wheel, and is built with the smartphone in mind. Pics: Faraday Future 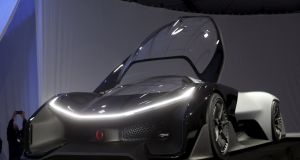 You may have heard of Tesla, but what about Faraday Future? The electric car company debuted a concept vehicle ahead of the opening of CES in Vegas, promising a car with a sixth sense that could drive itself.

Catchily named the FFZero1, the new car is an indicator of things to come, FF’s Nick Sampson, senior vice-president of R&D and product development, said.

In the wake of its unveiling, comparisons were drawn between the car and the Batmobile - and it’s not difficult to see why. FF says the vehicle has been built to be aerodynamic, with a planned signature “UFO line” that runs around the centre of the car, a design point “intended to give the sense that this vehicle is not completely of this world”.

The 1000 horsepower car has four motors, one at each wheel, and is built with the smartphone in mind. Not only does the FFZero1 make the smartphone an integral part of the car - it’s integrated into the steering column - but the company is also drawing inspiration from how Apple in particular changed how people communicate and interact.

“The way we interact with each other is so very different to what it was even 10 years ago,” said Mr Sampson. “At FF we believe with every bone in our body that the world is ready for a new way of looking at mobility. You don’t need to have a 100 year legacy in the automotive industry to define what the next generation of transportation needs to look and feel like.”

The company’s intention is clear: it wants to be the iPhone of the car industry.

But don’t get too excited at the thought of driving your very own Batmobile just yet. The car is still at the concept stage, so it’s not certain that it will ever be made for commercial sales. When a Faraday vehicle does make it to market, it may be a bit different to what the company showed off in Las Vegas.

What it has developed is something it’s calling “Variable Platform Architecture”, a modular engineering system that it will use to design and build new cars quickly in the future. It’s built around a “skateboard-style” chassis that can be adjusted according to the size of the battery, which replace the single power source with strings of batteries to change the power and range of the vehicle.

The 18-month-old car company has been growing rapidly in recent months, and currently employs around 750 people. Aiming to produce its first car by 2017, FF announced in 2015 that it would build a production centre in Nevada.