Telco also announces half-year revenue decline of 4 per cent, but says growth is near 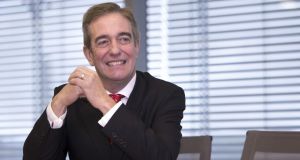 Richard Moat, the chief executive of Eircom, said the company would now review its property portfolio, which numbers about 1,200 sites nationwide, to see if there is scope for other commercial deals.

Eircom has sold one of its main Dublin telephone exchange sites, on Adelaide Road, to the Clancourt Group in a deal believed to be worth in excess of €10 million.

Clancourt is a property firm controlled by the family of developer Charlie Kenny. It is understood to be planning a major commercial development incorporating the site, which once housed a Dunlop tyre factory, and a number of adjacent plots.

Oglethorpe, a Clancourt-linked development company, this month lodged documents with the Land Registry in relation to the Adelaide Road plot, linking it to two other nearby sites. Clancourt bought the site in January using a vehicle called Park Place Property Investments D.

Richard Moat, the chief executive of Eircom, said the company would now review its property portfolio, which numbers about 1,200 sites nationwide, to see if there is scope for other commercial deals.

“Commercial sites are selling again, but we’re in no rush,” he said.

Eircom will continue to lease the Adelaide Road site from Clancourt for four years before it is vacated, because it must give notice to other telecoms companies that use it.

Adelaide Road is located in an area highly prized by developers, close to the southside of Dublin city centre. The exchange site was once coveted by the developer David Agar, who built several nearby commercial buildings.

NDBA architects were retained “a few years back” to design a major scheme centred on the exchange site, incorporating a 16-storey tower and a new street linking Adelaide Road and Hatch Street.

Clancourt did not respond to a request for comment. Eircom confirmed it had sold the site, but declined to provide further details.

Eircom yesterday reported half-year results showing a 4 per cent decline in revenue to €629 million, with a similar decline in profits, as it lost customers from its fixed-line business but recorded growth in mobile and high-speed fibre customers.

Mr Moat said the results were “pretty good” and predicted that the decline in Eircom’s revenue would stabilise in coming months, although he declined to predict when it would re-enter growth.

The company’s fibre rollout will reach 1.6 million homes by 2016, he said.

1 How much state pension will I get next year?
2 Oxford Covid vaccine trials offer hope for elderly
3 Tesco takes to the skies with home delivery by drone
4 Apple planning updates to its AirPods earbuds next year
5 Covid-19 will worsen shortage of accountants, says CPA Ireland
Real news has value SUBSCRIBE