Digicel sues firm in US over phone calls to Haiti 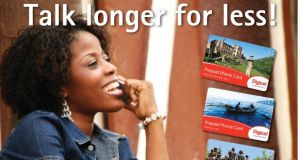 An advertisement for Digicel’s phone services to Haiti

Records about the jailing, and subsequent release, of a number of people in Haiti alleged to have been involved in a scam to defraud Denis O’Brien’s Digicel group, have been filed with a court in the United States.

One of those arrested is a hotel worker who was commissioned to buy SIM cards while another is a telecoms worker who was arrested soon after arriving in Haiti from the US.

The documents were filed as part of a case in which Digicel is suing Oregon-based UPM Telecom saying it is fraudulently facilitating people making calls to Haiti. It alleges that UPM is causing the calls to go through without incurring the 23 cents a minute charge that applies when third-party providers route international calls to Digicel customers in Haiti.

The allegedly fraudulent activity involves the use of Digicel SIM cards sent from Haiti to the US.

Documents filed recently in the US show that 37-year-old Maceus Outger, a front-desk hotel worker in Haiti, was arrested after officials called to his home and searched a bedroom in which they found four SIM servers, a number of mobile phones, eight GSM antennas, 553 pre-paid Digicel SIM cards, a laptop, and documents linked to money transfers and other matters.

Questioned by the authorities in Haiti in July 2014, Mr Outger said he bought the SIM cards after being given money by a Victor Manuel Moscoso. He sent the cards to Tyler Allen, in Oregon, he said. Mr Allen is one of the defendants in the case taken by Digicel.

Mr Outger said he met Mr Moscoso in the Best Western in April 2014. “He offered me his help so I could earn a little more. On each purchased SIM I get a commission of 89 cents,” he told the Haitian authorities, according to the documents filed in the US.

The hotel worker said he bought the SIM cards on the street and modems from Digicel.

Documents from the Court of Appeal in Port-au-Prince indicate that the hotel worker was released from jail on appeal in April of 2015. The appeal court found that the accusation of “bypassing” against Mr Outger was not a crime provided for in law. However he was guilty of “misconduct” and the equipment found in his possession was seized.

A second set of papers filed in the US courts concerns others jailed in Haiti arising out of the alleged fraud against Digicel. In 2012 Navindra Narine Noel, a US citizen resident in Miami, Barthelemy Jean Philippe, of Port-au-Prince, and Patrick Francis, also of Port-au-Prince, were all accused of telephone call diversion to the detriment of Digicel Haiti and the state of Haiti.

Mr Noel said he had just arrived in Haiti to do work for a company called Metro Wave. Mr Philippe said he worked for Mr Francis who rented a room to Mr Noel and that he did not otherwise know Mr Noel at all.

Mr Francis told the court he knew nothing about the offence of which he was being accused and that he believed he was only charged because his named had been mentioned by Mr Philippe. The men were sentenced to jail for periods of between three to 18 months, as well as fined.

When the convictions were appealed, included in the arguments for their release were that the charge against them had been altered from fraud to “bypassing” just before the men were convicted, and also that bypassing was a civil matter and that there was no text making it a criminal offence.

In his answers to the court, Mr Noel said he was hiding in a closet at the time of his arrest. “I hid to avoid danger because a little while afterwards I looked out of the window and saw lots of firearms. Five of us were arrested. All the others were released about three weeks later.”

The appeal court ordered the men’s release in August 2012. They had been sent to jail in May 2012.

The documents show that the arrests of Mr Noel and Mr Philippe occurred after an August 2011 raid on a premises where various items of communications equipment were found. In the same month Digicel Haiti had filed a complaint with the public prosecutor in Haiti saying it was the victim of fraud and was at a loss of about $628,940 (€574,000) as a result.

Investigations by Digicel had identified specific addresses at which call diversions were allegedly taking place, including the addresses where the men were arrested. The Haitian appeal court noted that no legal text criminalising “bypassing” or telephone call diversion had been presented to the it.

The US court has denied a motion from UPM to dismiss an amended claim from Digicel and said it has stated a claim for common law fraud and unjust enrichment.