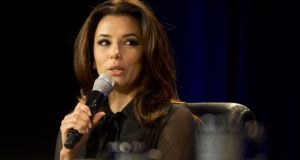 Desperate Housewives actress and angel investor Eva Longoria, who has been confirmed as a speaker at this year’s Web Summit. Photo: Bloomberg

The founder of listed gaming giant Zynga, Marcus Pincus, will also speak at the event which runs in Dublin’s RDS from November 4th- 6th.

This year’s event has been expanded to include a food summit, a film summit, a music summit and a sport summit.

The food summit, in conjunction with Good Food Ireland, will feature discussions on the technology and ethics of food and food production from speakers including Hampton Creek CEO Josh Tetrick. His food start-up, which is backed by Bill Gates, created the first artificial egg. Attendees at the food summit will be able to see what a 3D printed lunch looks like, while British food author and son of the Duchess of Cornwall, Tom Parker Bowles, will also speak.

The music summit will examine the intersection of business and technology with high-profile speakers including The Doors' managerJeff Jampol, Jonathan Dickins, the manager of Grammy-award-winner Adele, and the founders of companies such as Soundcloud, as well as Lauren Witzer, head of digital at Parkwood Entertainment, Beyonce’s record label.

The newly announced Sport Stage will feature Irish rugby star and angel investor Jamie Heaslip as well as Bill James, the main influence behind Brad Pitt’s movie Moneyball. His work on data analytics is widely credited as having helped end the Boston Red Sox’s 86-year wait for a World Series.

More than 20,000 people from 100 countries are expected to attend the event, which is Europe’s largest technology festival. A press corps of more than 1000 international journalists will also be in Dublin to cover the event. This represents the largest international business and technology press corps ever assembled in Ireland, with more journalists covering the event than Queen Elizabeth’s visit in 2011.

“Not only does it bring in great business for Dublin but it does much more for Brand Dublin and Brand Ireland. It presents Ireland as an innovative and creative place to visit and do business,” John Concannon, director of market development, Failté Ireland said.

1 Wetherspoon’s panto-villain chairman may have the last laugh
2 British exceptionalism backfires in style as Johnson tests positive for coronavirus
3 UK needs to be honest about its Covid-19 strategy
4 Will Covid-19 force Primark to rethink decision not to sell online?
5 Usit travel group in liquidation due to coronavirus crisis
Real news has value SUBSCRIBE