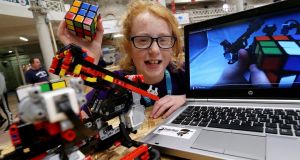 A robot that completes the Rubik’s Cube, a personal safety tracker, an app to tell you how quickly racing pigeons move, a simulator that lets you fly a plane to Australia and a computer game to encourage children to eat vegetables.

Those were some of hundreds of projects on display at the fifth CoderDojo Coolest Projects Awards in the RDS in Dublin on Saturday. More than 10,000 people attended the event, according to the organisers, which this year had about 700 registered projects, including more than 100 from CoderDojos outside Ireland.

Coolest Projects cofounder Noel King described the day-long exhibition of games, websites, apps and robots made by young coders aged five to 17 as “a big day, it is a lot of fun”, and noted that Coolest Projects provided a bridge from learning coding skills at local CoderDojos to innovating and creating future employment.

As well as seeing the inventions and creations, visitors to the Coolest Projects could attend talks in the “Launch’d” event about games and animation, coding, design, business development, innovation and women in technology.

There were also plenty of exhibits to keep presenters and visitors busy, including the popular Physics Busking roadshow organised by Dublin City University and the Institute of Physics in Ireland.

Mary Moloney, CEO of CoderDojo said the CoderDojo community of free computer clubs run by volunteers had now grown to more than 1,000 Dojos operating across 63 countries, reaching about 35,000 young people on a weekly basis.

“The inventions that some of the CoderDojo kids will bring to bear in the future will ... change the world,” said Moloney. “It is incredibly inspiring to see some of their work on display today.”

CoderDojo cofounder James Whelton, whose coding club at his school in Cork kick-started the now global initiative, said he hoped the young coders would be inspired at Coolest Projects.

“That could be through seeing other young people working on interesting projects and also the feedback they get on their own projects, and through Launch’d they have the opportunity to be exposed to cutting edge ideas,” he said. “These are all avenues for inspiration and the hope is that they will take what they learn and experience at Coolest Projects and use that as fuel for the next 12 months.”

1 State’s biggest landlord records 30% rise in rental income
2 What will the office market look like after the great remote working experiment?
3 Irish tourism must also help itself to survive the pandemic
4 Facebook agrees Irish wind farm deal with Brookfield
5 ‘Saudi Arabia is where the opportunities will happen in future’
Real news has value SUBSCRIBE