Caterpillar to invest £7m in manufacturing project in North 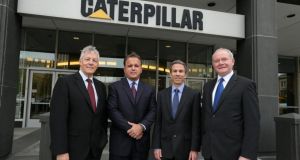 Caterpillar, the US engineering group, is to invest £7 million and create 100 jobs in a new manufacturing project at its Northern Ireland operation.

Just over a year ago the group, which is headquartered in Peoria, Illinois, axed more than 700 manufacturing jobs at its Northern Ireland facility, formerly known as FG Wilson.

Details of the investment were announced yesterday by the North’s First and Deputy First Minister during their business mission to the US.

Peter Robinson and Martin McGuinness met senior Caterpillar management in Peoria, where Caterpillar confirmed its plans to begin production of its Cat wheeled material handlers from the middle of 2014. The material handling machines are designed for the industrial, waste and forestry sectors.

All Caterpillar locations in the North “will benefit through the diversification of manufacturing, enabling us to continue to develop the skills and expertise of our local work force”,” he said.

Mr Robinson said the manufacturing project would be the first to be located in Northern Ireland outside the firm’s existing business operation. “The project is especially important as it has the potential to help attract additional projects from the wider Caterpillar family,” Mr Robinson added.

According to Mr McGuinness, both Northern Ireland Ministers believe the opportunity to meet the US group’s executives on home soil will help “cement relationships”.