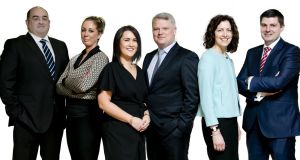 BT Ireland said underlying revenues rose 4 per cent year-on-year during the third quarter as its parent posted its best growth for more than seven years and announced it would restructure its business following the acquisition of EE.

BT Group posted a 3 per cent rise in core earnings to £1.6 billion on better-than-expected revenue of £4.6 billion, up 4.7 per cent. It pinned down its previous forecast for “growth” in revenue for the full year to up 1-2 per cent.

The group did not offer a full breakdown for its all-Ireland subsidiary but said the unit saw a 4 per cent rise in revenue with growth attributed to increased equipment sales, strong data and call volumes and a number of big deals with clients such as RSA Insurance and Three Ireland.

“Today’s results reflect yet another positive quarter for our business with growth in both revenue and profit. Our recent investment in people, products and services, and our global network is yielding strong results, as we continue to secure major wholesale and business deals and capture greater market share of Ireland’s growing multinational base,” said Colm O’Neill, managing director, BT Corporate UK and Ireland.

BT Group finalised a deal to acquire Britain’s biggest mobile operator EE for £12.5 billion early last year but final approval for the acquisition was only granted in recent days. It announced plans to restructure the business to incorporate the mobile operator on Monday.

1 Brother is dragging his heels as executor of uncle’s will - is there anything I can do?
2 Stocktake: Has Warren Buffett lost the magic touch?
3 Irish whiskey sales near milestone of 12m cases a year
4 Apple tax case: Four individual lawyers paid over €500,000 each
5 Covid-19 mortgage breaks: What’s the catch?
Real news has value SUBSCRIBE