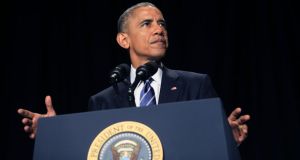 The American Chamber of Commerce Ireland is not known its bashfulness. If anything, it is known for being a cheerleader for many of the biggest US employers based here.

It has long boasted about the impact its member companies have had in terms of contributing to the local economy and has consistently come to the defence of multinationals and their questionable tax strategies. But the chamber was unusually quiet this week though when a colleague from this stable got in touch to ask the body’s views on President Barack Obama’s new tax plans.

Presenting his budget this week, President Obama proposed a mandatory 14 per cent tax on profits already held outside the United States by US multinationals in countries such as Ireland.

His targeting of future foreign earnings of US multinationals will clearly have a significant effect on the Irish business of its members if passed – a moot point given the Republican control of both houses of Congress. Somewhat bizarrely, the chamber was unsure when contacted if it had anything to say on the matter.

At the time of writing, it still hadn’t been back in touch to let us know its views. It wasn’t the only one keeping schtum. Many of its member companies also had little to say on the matter, although a few ventured a “no comment”.

Presumably the chamber is happier to rely on its reputation for doing its business away from prying eyes of public spaces.