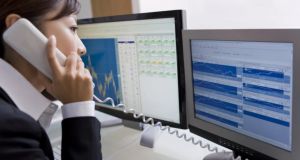 The inaugural Regional Business Barometer, conducted by Amárach Research on behalf of cloud telecoms provider Magnet, found more than half of firms in Dublin are likely to invest in IT infrastructure in the coming year.

This contrasts with the Midlands (Offaly, Longford, Westmeath and Laois), where only a quarter of firms said they were likely to invest in IT over the next year.

Just 11 per cent of SMEs are aware of Government technology and business grants, while only 3 per cent have successfully accessed the Enterprise Ireland voucher and only 1 per cent availed of the online trading voucher, according to the survey of 600 SMEs across the Republic of Ireland.

“The poor take-up of these schemes means more needs to be done by both Government and industry to educate the SME community of the supports available.”

The survey revealed that firms in the midwest – covering Limerick, Clare, and North Tipperary – are most confident about the year ahead, followed by those in Dublin, at rates of 73 per cent and 67 per cent respectively.

In contrast, only 57 per cent of firms in Cork and Kerry said they were confident about the future.

The manufacturing sector is most positive in its outlook for the year ahead, while SMEs in hotels, restaurants and bars the most negative.

Mr Kellett said businesses are proving very resilient in the face of the high operating costs and financing issues they are facing.

“While the upswing is seeping through to all businesses, it’s clear that the smaller ones are most vulnerable and in need of support,” he added.

One in 10 of all SMEs said they are likely to open a new premises over the next 12 months, with this figure being one in eight in relation to firms in Dublin.