Attracting attention during the tech event season requires imagination and . . . maybe a lightsabre 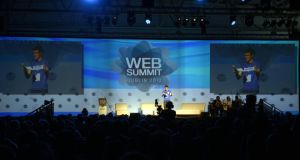 Some companies will get employees to wear crazy clothes just to stand out from the crowd at events such as the Dublin Web Summit. PHOTOGRAPH: BRENDA FITZSIMONS

Walking along Howard Street in San Francisco late last February it was hard not to notice the number of adults cramming into bars and restaurants sporting lightsabres.

With an Imperial attack unlikely on the West Coast that evening, the reason for all this was the RSA2013 IT security conference down the road in the city’s Moscone Centre.

There, companies had used every tactic from free T-shirts to mock-up bars, the original Space Invaders arcade game, a dancing robot and more pens than a Bic factory to try and get conference attendees to their stand.

“Everybody was tweeting pictures of their lightsabres,” remembers Dan Preiss, director of event marketing at EMC, RSA’s parent company, who has organised large corporate conferences such as EMC World and Cisco Live.

“It was a really good gimmick, but it’s funny, I can’t remember the name of company actually giving them out, which probably says something as well.”

Stacy Thayer, founder of the security-focused Source Conference and another attendee at last year’s RSA event can’t remember the name of the company handing out the Star Wars memorabilia either.

Replica ninja swords
However, Boston-based Thayer says that “in general vendors who take time to offer something creative or fun at their stand do get attention”.

She cites SecureNinja’s decision to hand out replica ninja swords at last July’s Black Hat event in Las Vegas as being particularly successful in getting numbers towards its booth.

She says such examples of tying gifts to “branding and messaging” is key, though there are still some conference attendees who “are practically walking around with shopping carts” at some conferences who “just don’t care” what any company is selling and only want as much freebies as they can get their hands on.

Tanya Duncan, managing director of data centre company Interxion, says it’s easy to get sucked in by some marketing ideas at the events, admitting she queued to use a golf simulator brought by “an estate agent, who was trying to shift industrial units at the Web Summit a few years ago”.

“You get roped into it,” Duncan says, “and then of course they chew the ear off you while you’re waiting on your colleague to finish on the machine. It can work . . . I’ve kept the man’s card.”

Daire Hickey, who acts as director for guests and press at the Web Summit, says many companies will get employees to “wear crazy clothes just to stand out from the crowd like a lime green suit”. Others use ideas like free smoothies, coffees, cupcakes or Bloody Marys to curry favour.

One company even hired dwarves to dress like leprechauns which “seemed to work”.

“One thing which does get people towards you,” says Hickey, “is if it looks like you’ve spent money on the stand, you have to think they’re successful.”

But some companies, says Thayer, get things very wrong. She recalls a conference in 2012 where an organisation transformed their stand into a psychedelic mix of colours, all centred on a 1970s themed Volkswagen van which turned many visitors off.

The same company used “scantily clad” spokesmodels, with women hired to stand around the conference centre to attract attention and scan the conference badge of passing delegates to get their details.

“There was no conversation, they were nice women but then it’s not about the product,” says Thayer. She says she has seen the “booth babe” phenomenon “backfire on a company” several times in terms of affecting credibility.

Last June’s Launch Festival for start-ups in San Francisco hit the headlines for its “no booth babe” policy. Event organiser, Jason Calacanis says that with the event in its sixth year the practice has been “outlawed” for some time.

“A start-up – which I’d rather not mention – broke the rule. We think they did this on purpose so they could get press,” said Calacanis.

“We are not against attractive people, or even folks dressing sexy, we are against folks being made to feel uncomfortable in a business setting”.

Duncan says the first time she experienced this trend was a “data centre conference in London a few years ago”, adding she was “a bit taken aback”.

“It felt very uncomfortable as well. It didn’t feel like a natural fit. On a personal level it wouldn’t attract me to the exhibitor’s stand.”

‘Sex sells’
Vivienne Mee, managing director of Rits Computer Forensics, says “the view is sex sells so anything to glam [a conference booth] up, they’ll do it”.

“I don’t really have a problem with it,” says Mee who notes that similar tactics are used to “sell everything from crisps to cars”.

Preiss, who admits that there were some cases of the practice at recent EMC events, points out that “usually we have very little line of sight visibility into what [a company] plans to do” with their booth.

“I’d like to think in the tech sector there’s a little bit of a higher bar, and a little more decorum when it comes to how they go about marketing their goods,” he says.

“I think the term booth babes is less and less used.”

1 Ireland has EU’s most progressive tax system, study finds
2 Who are Ireland’s 17 billionaires?
3 Financial payments group Planet in rumoured €1.98bn sale
4 Fallon & Byrne gets permission for extension in Exchequer Street
5 Are there annual limits on inheritances or gifts to a child?
6 Doomsday Clock counting down remaining time left for civilisation
7 Tech giants step up lobbying in Washington
8 Davos Diary: UCD prof goes batty, Ivanka hits town and Prince Charles takes the stage
9 Fianna Fáil may have just pressed the pause button on the property market
10 Are you a Monica, Joey or Chandler when it comes to your data privacy?
Real news has value SUBSCRIBE