Spoonfuls of market research help the medicine go down 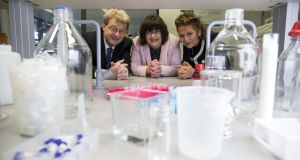 Food companies have always tested new foods or beverages on ordinary consumers before release. Now the pharmaceutical companies are doing the same thing to help improve proper drug-taking for people on prescriptions.

A Cork-based company has moved to meet the demand from big pharma for consumer-testing services related to the taste of medicines. SRL Research earlier this month set up a dedicated centre of excellence for this service, SRL Pharma.

The company partnered with University College Cork’s School of Pharmacy and with Mercy University Hospital’s Clinical Research Facility to set up the company that will serve as a centre of excellence for this specialised service, says SRL Pharma chief executive and SRL Research founder Margaret Shine.

Using panels of human testers to assess the flavour and texture of new food products seems logical enough, yet not all companies bother with this kind of research.

That may well be why 75 per cent of new products of all types go out of production within two years, says Shine. “Sensory science could improve that.”

It is less obvious why this might be of interest to the pharmaceutical companies but these companies are under pressure to make their products as palatable as possible.

The goal is to improve patient compliance – proper drug–taking – to ensure those on prescriptions are taking their drugs in the right way. This means the drugs are having the best possible effect and better compliance can also reduce the possibility of side effects if a person “doubles up” if they miss a dose.

If a drug tastes bad then compliance can be affected. This is particularly true for children, who will shy away from bitter tastes.

But the elderly can also be affected, says Shine. Tablets become more difficult to swallow and so liquid versions of a drug may be needed.

There is also a trend towards drugs that can be chewed and swallowed or dissolve in the mouth for ease of use. These in particular must be palatable if drug compliance is to be achieved.

This is why the European Medicines Agency is demanding that drug companies develop “age-appropriate” formulations of their products, Shine says.

This is where her company, with 14 years’ experience in sensory research, comes in. When she started, much of the business came from the dairy industry; but over time she set up sensory panels to assess consumer response to all types of products. It could be anything from cars to infant formula – even pet food has been assessed by these panels.

“Things grew from my own background in research development,” she says. Her background is in food chemistry and she adopts a very rigorous approach to the way she sets up her sensory panels and derives information from them.

“Sensory science is a scientific discipline, ” she says. “It requires an experimental design and must support statistical analysis.”

The raw data may come in as a personal response from one or more of the five senses, but hard data is needed by the client, particularly in the pharma area. “Everything we supply is scientifically based,” she says. For this reason she employs sensory scientists, pharmacists and statisticians.

Her company does not come up with the formulations to mask a bitter- tasting drug or to sweeten a liquid preparation. That is up to the companies who prepare versions of a drug and then Shine assesses the consumer response.

“It is not an attempt to get a nice flavour into the product,” she says. “It is about maintaining a level of integrity for the product but also making it more acceptable to the consumer.”

The pharmaceutical side of the business has grown rapidly over the past five years, she says, and caused the company to expand its services and its international reach.

The United States and Europe are key markets for the company but SRL Pharma has also won contracts in China, Australia and South America.

The growth in this area encouraged SRL in 2013 to acquire ISS, Independent Sensory Services, a company led by Dr Liz Sheehan.

“That company had the experts and Dr Sheehan had sensory expertise. It was resources and talent we were looking for,” says Shine. Sheehan now heads up the SRL Pharma centre of excellence at UCC.

The drug side of the business should see accelerated growth due to drugs coming out of patent. Generic versions of popular drugs will need something that sets them apart from competitors; and palatability, or having chewable tablet or liquid versions of a drug, will be important marketing points.