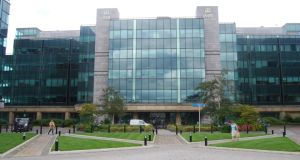 A relatively unknown American securities and derivatives trading company is to move its European headquarters from George’s Dock House in Dublin’s IFSC to the high profile former AIB treasury building at the front of the financial services centre.

The relocation will guarantee a high level of recognition for Susquehanna International Group (SIG), which is to lease more than 4,645sq m (50,000sq ft) on the top three floors when AIB transfers the last of its treasury staff next month to Bankcentre in Ballsbridge. It is easily the largest office letting in the city this year.

SIG will be paying around ¤279 per sq m (¤26 per sq ft), a figure that suggests that rents are still stagnant even in a well located, high quality building such as that being vacated by AIB.


Syndicate
Before SIG moves in, Warren Private, which manages the block for a group of investors, are due to spend between ¤8 and ¤10 million on refurbishing the five-storey building which has an overall floor area of about 9,390sq m (100,000sq ft) and was regarded as among the best office accommodation in the city when it was completed in 1990. Part of the funding for the upgrade is expected to come from a sinking fund which currently stands at ¤6.5 million.

Although AIB funded the ¤78 million purchase of the investment by a 10-man syndicate in 2003, it announced its intention last year to avail of a break option and end its lease to allow treasury staff to relocate to surplus accommodation in Ballsbridge as part of a cost saving operation.

One valuer has estimated that the distinctive IFSC block is now probably worth little more than ¤35 million. The international researcher IPD has reported office values in Dublin city down by 64 per cent since the peak.


Surprising
The 2003 sale of the treasury building led to consternation in the investment market when the then minister for finance Charlie McCreevy intervened at short notice to block a range of tax breaks worth almost ¤26 million going to purchasers.

His peremptory strike was all the more surprising because two years earlier another business syndicate was allowed to avail of almost ¤48 million in capital allowances when it bought an adjoining Bank of Ireland building, La Touche House, for over ¤85 million.

Deirdre Costello of Jone Lang LaSalle and Willie Dowling of CBRE, who handled the letting to SIG, are expected to quote around ¤322 per sq m (¤30 per sq ft) for a similar volume of space available in the same building.