Verizon in talks with AOL about potential acquisition 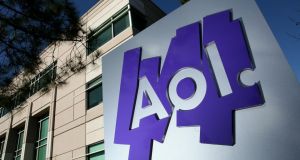 Verizon is understood to be interested in AOL’s programmatic advertising technology -- the automated buying and selling of ads online --as well as internet properties including The Huffington Post. (Photograph: Justin Sullivan/Getty Images)

Verizon Communications has approached AOL about a potential acquisition or joint venture with the internet company to expand its mobile-video offerings.

It’s understood that Verizon hasn’t made a formal proposal to AOL, and no agreement is imminent.

Verizon is primarily interested in AOL’s programmatic advertising technology -- the automated buying and selling of ads online -- which two people said could be paired with a future online-video product. With a takeover it would also gain internet properties including The Huffington Post and subscribers who pay for Internet access.

AOL ended trading yesterday with a market value of about $3.5 billion and rose as much as 13 per cent after the close of regular trading in New York. In German trading today, the stock climbed 11 per cent to the equivalent of $49.52 as of 9:22 a.m. in Frankfurt. Verizon’s market value is about $193 billion.

Spokesmen for Verizon and AOL declined to comment. Just a few years after AOL’s failed marriage with Time Warner Inc. ended in its spinoff, chief executive officer Tim Armstrong has transformed the Web portal into a different company. A venture would allow Verizon to focus on the advertising technology as the company seeks expertise in three areas: online content, mobile video and advertising, one person said.

The company also has held talks with several of AOL’s peers about how to bolster those businesses. Chasing ATandT Researcher EMarketer Inc. projected in July that mobile advertising would lead 2014’s rise in total media ad spending in the US, with advertisers spending 83 per cent more on tablets and smartphones than they did in 2013 -- an increase of $8.04 billion.

In a takeover, Verizon would also gain AOL’s 2.3 million paying members, in addition to Internet brands including the Huffington Post, TechCrunch and Engadget. It’s unclear if Verizon is interested in those media properties, which draw more than 200 million unique visitors a month, the fourth-most in the US, behind Google Inc., Yahoo Inc. and Facebook Inc., according to November data from researcher ComScore Inc.

Once known for its “You’ve got mail” notification to consumers, AOL was one of the main portals through which people first accessed the Internet. Its trajectory peaked with a now- infamous $124 billion combination with Time Warner 15 years ago, after which it began losing customers to faster services from telephone and cable-television carriers. After years of losses the merger was unwound with a spinoff in late 2009. Some of AOL’s members still use its dial-up internet service, though the company is winding down that business.

If Verizon acquired the New York-based company, it could continue that process and convert some of those customers to its FiOS broadband service, one of the people said.

Verizon is still paying off debt from buying Vodafone’s 45 per cent stake in Verizon Wireless last year for $130 billion, and the company is stockpiling cash to acquire wireless spectrum in an auction that began in November.

1 Should my mam wait for house prices to drop before buying?
2 Cheers: Conor McGregor's whiskey races up the sales chart
3 ‘I have a talent for justifying purchases’
4 US ‘hard seltzer’ drink White Claw launches in Ireland
5 Two prominent business leaders in planning row with neighbour
6 Coronavirus: Big majority ‘uncomfortable’ returning to everyday activities
7 Chris Johns: Past is another country when it comes to our post-pandemic future
8 Marlborough buys secretarial job agency for £3.9m
9 ‘I’m so lucky to be in the Caribbean – a million miles from Derry Girls’
10 Joint accounts: if one of us dies, can the other access the money?
Real news has value SUBSCRIBE