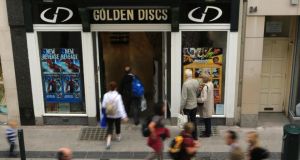 Turnover at home entertainment retailer Golden Disc Group rose 43 per cent in the year to the end of June 2014, as it opened six new stores.

The company said turnover was €12 million for the period, up from €8.4 million in the previous year.

The retail opened new stores in Cork, Kildare, Swords, Blanchardstown and Stephen’s Green in Dublin; a pop-up store was also located on Dublin’s Grafton Street for the Christmas trading period. While they contributed to revenue, they also hit profitability due to once-off costs associated with the expansion.

Profit for the year was €30,885. DVD sales were flat, but audio sales showed some growth, with vinyl up more than 500 per cent compared with the same period a year earlier.

The firm now has 15 stores throughout the country, and is considering opening more in the coming months.

“The market remains extremely competitive and the store portfolio is under constant review but where we see opportunities we will open additional stores,” he said.

The company is also planning to open an online store before the end of the year.

1 How long can Government afford to keep State pension age at 66?
2 Guinness brings out a non-alcoholic version of the black stuff
3 How much will a Covid-19 vaccine cost?
4 How on earth do we the calculate the cost of Level 5 for the Irish economy?
5 Irish start-up Wayflyer raises €7.8m in seed funding
6 Gap looks at closing Irish stores
7 Ulster Bank tells ‘deeply concerned’ Minister no decision yet on future
8 Paul Coulson plans record $1.8bn Ardagh investment
9 Level 5 closures, fall in GDP, Aldi toy rush and struggling borrowers
10 Learner drivers could pay €600 more in insurance due to test delays
Real news has value SUBSCRIBE