Tiger to open 12 more stores after a roaring trade 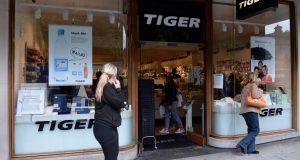 Tiger: the Irish arm was begun by a couple who saw its London shops. It is owned 50-50 with the Danish parent and is set to change its name to Flying Tiger Copenhagen. Photograph: Eric Luke

The Irish company that runs the Tiger chain of retail stores plans to open up to 12 new shops by the end of 2017 and is rebranding the group as Flying Tiger Copenhagen from next month.

Tiger Retail Ireland currently operates 24 stores in Ireland (including one in Northern Ireland).

“We would have a goal of 32 to 36 stores in Ireland,” said Gillian Maxwell, who established the Irish arm of Tiger with her husband Niall Stringer.

“They will have to be the right size and it’s as much now about making sure the stores are performing well as opening new outlets. It will depend on the right location and the right rent deal.”

Ms Maxwell was speaking to The Irish Times in Boston last week, where she was part of the EY Entrepreneur of the Year chief executives’ retreat. Tiger has been shortlisted for an award in the emerging category.

All of the profits are being reinvested in the new shops, with about €120,000 needed per store, including stock.

The change of name to Flying Tiger Copenhagen, is part of a global rebrand by its Danish parent company from June 1st. This is designed to differentiate the retailer from other Tiger brands in the market.

“We are various different brands across various markets,” Ms Maxwell said. “This reaffirms the Danishness. It’s a brand that has been launched in Japan and New York and has worked quite well.”

Tiger has set out its stall in Ireland as a value retailer of quality products. Its first outlet here opened in September 2011 in Dún Laoghaire. “It was a pop-up store on a short-term, flexible lease,” Ms Maxwell said.

She said white dinner candles are its best-selling product, along with water, rice cakes and red ribbons. Its busiest locations are Patrick Street in Cork and Nassau Street in Dublin, and the average basket size in store is between €5 and €6.

The Maxwells stumbled on the concept on a rainy day in London in 2010, popping in to buy an umbrella. “We really loved the concept and couldn’t believe the store wasn’t in Dublin,” Ms Maxwell said.

The Irish company is owned 50-50 by the Irish couple and Tiger’s Danish parent. “We run the business and they provide the products,” she said.