The firms thought to be in the running 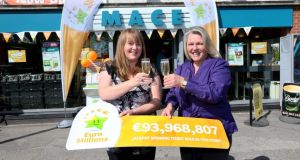 The Irish lottery, which commands the fifth highest lottery sales in Europe on a per capita basis, is viewed as a lucrative addition.


While Gtech may have been out-flanked by Camelot in wooing An Post, it still ranks as the largest lottery and gaming house in the world, boasting an annual turnover of €3 billion.

Its Italian parent Lottomatica recently rebranded the entire business as Gtech in recognition of its subsidiary’s strong global brand.

While it is more than capable of mounting a solo run for the Irish licence, precedence suggests it will to bring in a partner.

The company has outgrown its original incarnation as a technology provider, moving into the operations side of the business where margins are higher.

Despite winning three out of the last four big US state contracts, Gtech’s advance in North America has hit a speed bump.

Its Illinois consortium was recently fined $20 million by the state for missing its sales targets, and may face further penalties if sales fail to pick up.

The company is considered strong on innovation, and as the existing technology supplier to the lottery here with a 70-strong staff on the ground, it boasts an intimate knowledge of the business.

The decision by An Post to jilt its long-standing technology partner Gtech for Camelot provided the only real surprise of the process to date.

A joint bid by the current incumbent, which enjoys positive brand recognition on the ground and a proven track record, and its cash-rich neighbour in the UK will be hard to beat.

Camelot boasts the biggest internet platform in Europe, with 15-17 per cent of the UK business now coming from online sales, a potential which the Government is keen to exploit here.

The company will, however, have buy in its technology, potentially at a higher price than its rivals who have their own systems.

Like Gtech, Camelot has also been embroiled in controversy in US. The Pennsylvania attorney-general recently pulled the plug on its successful bid to manage the state lottery, claiming the deal was illegal.

The process, which would have been Camelot’s first foreign success as an operator, remains in limbo.

The company will be desperate to avoid another failure here but its Canadian owners – Ontario Teachers’ Pension Plan – are likely to rein in any exuberant bidding.

An aggressive domestic acquisition campaign has resulted in Tatts owning or operating lottery licences in every Australian state and territory except for Western Australia, which remains in public hands.

The firm is now seeking to expand into foreign markets and is known to have amassed a significant war chest to do so.

The Irish lottery, which commands the fifth highest lottery sales in Europe on a per capita basis, is viewed as a lucrative addition to its growing portfolio of interests.

Rumours surfaced last year that the company may have been dissuaded from investing in Europe by the protracted nature of sovereign debt crisis but these have dissipated in tandem with the crisis.

The media shy company has never explicitly indicated if it will mount a bid for the Irish business, but it is known to have had contacts with officials here during the briefing process, and is considering opening a European base in Ireland should it win.

Unlike Camelot, Tatts has an established in-house technology system which allows it to bid aggressively on a cost-out basis, often under-cutting rivals.

It has a reputation as a cost-cutter and most of the original jobs in the former state-run New South Wales lottery, which it took over in 2010, have been axed or leveraged onto its existing operations – news that won’t sit well with the 107 Irish staff.