Coffee chain was criticised for methods to minimuse tax burden 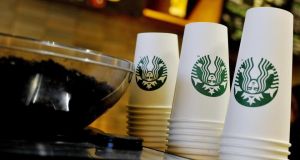 Starbucks takeaway cups at a Starbucks in central London, as the coffee shop chain announced it is moving its European headquarters from the Netherlands to the UK following a row over tax avoidance. Photograph: Nick Ansell/PA Wire

Starbucks, the world’s biggest coffee chain, will move its European head office to London from Amsterdam, increasing the amount of tax it pays in the UK following criticism over the matter last year.

The move will concentrate “a modest number” of senior executives in the UK capital, with some being transferred from Amsterdam, Starbucks said today.

The Seattle-based company also said it means it will pay more tax in the UK.

British MPs and activist groups blasted Starbucks last year, saying the company used complex accounting methods to minimise its tax burden. The coffee chain said last year it would pay £10 million of UK corporation tax in both 2013 and 2014. “They had been taken to task in the UK for tax - a perception that they were not paying their fair share of taxes,” Sara Senatore, an analyst at Sanford Bernstein and Company in New York, said in an interview. “My interpretation is that this might be a response to that.”

The move also makes sense from a business perspective because the UK market is large and important, she said.

Politicians and groups that had criticized Starbucks said today that while they welcomed the relocation, they also wanted to see how it works out in practice. “If Starbucks are going to pay more tax in the UK, that’s a good thing, and it’s a victory for consumer pressure,” Margaret Hodge, chairwoman of the House of Commons Public Accounts Committee, said today in a statement.

“But we’ll have to wait for more detail.” European Operations Starbucks - which opened its first European stores in 1998 - said the UK is its largest and fastest-growing market in Europe.

Shifting the regional head office to London will enable management to better oversee its business in the country, where it has more than 780 cafes and plans to open more than 100 outlets this year.

The coffee seller’s European business has struggled recently compared to the U.S. and its China and Asia Pacific region.

The openings will create 1,000 permanent jobs in Britain, where Starbucks already has more than 7,500 employees. “We think that’s great if they want to move to London, as long as they pay their fair share of tax like the rest of us,” said Sarah Kwei, a spokeswoman for activist group UK Uncut.

Starbucks is the latest in a wave of overseas companies moving head offices to London, lured in part by the country’s declining corporate taxes.

General Electric’s oil and gas unit and Chinese developer ABP (China) Holdings Group were among those that moved to the UK capital last year. The UK’s base corporate rate is now 21 per cent, down from 28 per cent in 2010.