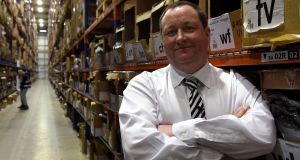 Sports Direct founder Mike Ashley in the picking warehouse during a tour of the Sports Direct headquarters in Shirebrook, Derbyshire. Ashley dismissed much of what has been written about the group as “stupid”

Sports Direct’s Mike Ashley has stepped up the rhetoric in his battle with MPs in an extraordinary series of interviews with selected media outlets at the company’s head office and warehouse complex in Shirebrook, Derbyshire.

The combative founder of Britain’s biggest sporting goods group rarely gives interviews, but his previous reluctance to talk to journalists is clearly not because of a lack of opinions or an inability to come up with a quotable quote.

As the controversial billionaire again made clear that he intends to ignore a summons to Westminster to answer questions about working practices at the group, he treated reporters to his views on the City of London, parliament, the media and the competition authorities. None of them came out well.

On the City, Ashley said he had warned institutional investors when the company floated that he intended to run it exactly as he had when it was private. They were happy with that, he claimed, but now “everyone wants to know everything,” he said.

“We never signed up to this level of exposure. Where in the prospectus does it say we have to do this? Why, if I discover that a six-pair pack of socks sells better than a three-pack, should I tell everyone?”

Ashley has been criticised for employing his daughter’s boyfriend as a property consultant but told reporters he did not need to justify whom he hired. “If you don’t trust me, then don’t own the shares. You only own them because you think they are going to go up.

“Don’t sit in the cheap seats at the back and say I can’t be house trained. That is the type of game the City plays and I will not allow Sports Direct to play into it.”

“He, for nothing more than political gain, started this snowball rolling down the hill,” Ashley said. “I would love to get him in a boxing ring with a pair of gloves on and box his ears, that’s what I would like to do.”

Ashley also hit out at sports goods suppliers, claiming some refused to deal with Sports Direct because it discounted products. “The sports trade is totally rigged, make no mistake,” he claimed. The Competition and Markets Authority was, he said, “as useful as a chocolate fireguard.”

MPs have summoned Ashley to parliament on June 7th to answer questions from the business, innovation and skills committee about employment conditions at the group.

Dismissing the committee as a “joke”, Ashley again accused MPs of “showboating” and said he did not believe they had the power to force him to attend. His “current intention is not to go”, but the committee made clear yesterday that it will continue to pursue him.

The decision to invite the press to Sports Direct’s HQ was a risky strategy for Ashley and one he may now be regretting; his investors certainly are, as the group’s shares tumbled more than 10 per cent in the wake of the interviews.

It wasn’t the billionaire’s truculent talk of boxing people’s ears or accusations of rigged markets that did the damage to the price, but Ashley’s comments on current trading.

That, by any definition, is a profits warning, and the shares responded accordingly. It is the group’s second warning on profits this year. In January, almost half a billion pounds was wiped from its market value after it admitted Christmas trading had been poor.

At the time, the City had been expecting profits of around £420 million for the year that ends next month. Now it seems Sports Direct will be unable to match the £383 million it reported the previous year. That will do nothing to improve Ashley’s fraught relationship with the City and neither will his decision to deliver a profit warning via media interviews rather than a formal statement to the stock exchange.