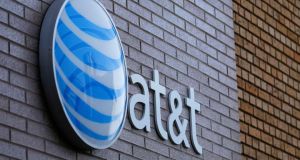 US telco giant AT&T is considering a bid for Eircom. REUTERS/Mike Blake

reports US telco giant AT&T may be considering Eircom as a potential low-tax route into Europe. The newspaper says executives from the US firm have been a regular fixture at Eircom’s headquarters in recent weeks. It speculates that while it was widely thought Eircom was gearing up for a €3 billion stock-exchange flotation, the firm has said no pre-IPO process is under way and a deadline for “clarity of options” is the end of this year rather than the autumn.

Dalata buys D4 hotels stake Dalata, the hotel operator run by former Jurys boss Pat McCann, has purchased a 25 per cent stake in the companies behind the former Jurys and Berkeley Court Hotels in Dublin 4 for nearly €22 million, according to the Sunday Times. This puts a value of €88 million on the hotels, which were bought

for €380 million by developer Seán Dunne during the boom. The other 75 per cent of the Ballsbridge hotel companies is owned by Ulster Bank and Rabobank.

Funds eye Homebase DIY retailer Homebase, which has a substantial presence in Ireland, is at the centre of increased speculation that it is to be put up for sale. According to the Sunday Telegraph, the struggling

chain is the focus of attention from funds including US investment house Apollo and OpCapita.

Expectations of a sale were triggered earlier this year when the chief executive of its parent company, Home Retail Group, announced a full-scale review of the company.

Loan details protected Investment fund CarVal – and its peers – can keep key details about their Irish loan acquisitions secret during court cases following a decision in the Commercial Court last week, reports the Sunday Business Post. The paper reports a legal source suggesting the decision sets a precedent that could protect

investment funds buying up debt attached to Irish assets from having to disclose details such as the percentage uplift sought when offering debtors the opportunity to buy out their loans.

Coolmore setback in Australia Coolmore, the bloodstock firm controlled by John Magnier, has suffered a setback in efforts to prevent the development of a massive open-cut mine just 500m

from its Marquee Stud in Australia. The Sunday Business Post reports the planning department in New South Wales has opted to support plans by mining giant Anglo American to expand its interests in Hunter Valley despite objections from Coolmore.